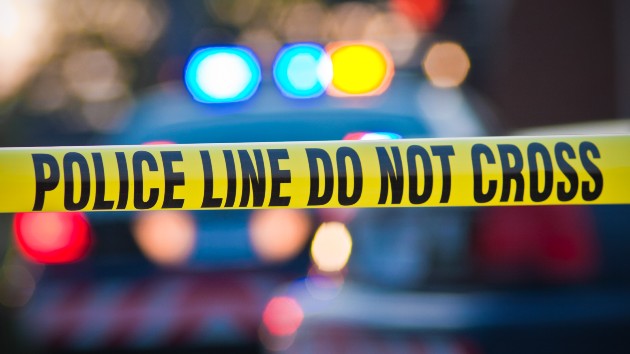 (CHICAGO) — A violent weekend in Chicago left at least 48 people shot in separate incidents, including two police officers who were wounded on Sunday morning when they responded to a ShotSpotter detection alert, authorities said.

At least five people were killed in the rash of shootings between Friday and Sunday morning, according to Chicago Police Department incident reports reviewed by ABC News.

Police said six children under the age of 17 were among the victims wounded, including a 2-year-old girl who was sitting in the back seat of a car when she was hit by a bullet fired from another vehicle. Two 14-year-olds and a 13-year-old were also shot and wounded in separate incidents, according to the reports.

“Let’s pray for peace in our city,” Chicago Mayor Lori Lightfoot said at a news conference Sunday morning. “We’ve got to put these guns down. We’ve got to stop the flow of illegal guns into our city.”

Chicago Police Superintendent David Brown appeared with Lightfoot at the news conference to release details on a shooting around 7:19 a.m. Sunday that sent two police officers to the hospital with gunshot wounds.

One of the wounded officers was hit in the shoulder, just above his bulletproof vest, and the other officer was shot in the hand, Brown said. He said both officers were being treated at Mount Sinai Hospital and were listed in good condition.

Brown said that when the officers arrived in the Lawndale neighborhood on Chicago’s West Side, they spotted a person in an alley. As the officers approached the person, the individual turned around and opened fire without warning, prompting a gunfight.

The superintendent said the shooter, whose name was not immediately released, was shot in their lower extremities and was being treated at a different hospital.

“It just underscores the danger our men and women in the police department face every single day,” Lightfoot said. “They run to danger to protect us, and we can’t ever forget that.”

In the past 15 months, he said 16 Chicago police officers have been wounded and another 92 were shot at.

Sunday’s episode came amid shootings that erupted across the city over the weekend. Shortly after the two officers were wounded, a 13-year-old boy was shot in the head and neck in the McKinley Park area of southwest Chicago, according to a police report. Police said the boy, who was taken to a hospital in critical condition, was standing on a sidewalk when a car pulled up and one of its occupants opened fire.

No arrests have been made in the boy’s shooting.

The child’s shooting came after a 2-year-old girl was shot while riding in the rear seat of car in the Little Village neighborhood on Chicago’s West Side. Police said the shots were fired from another vehicle. No arrests have been made in the incident.

The girl was treated at Mount Sinai Hospital and was listed in good condition, police said.

Two men were killed and three were wounded in a shooting that broke out at a party just after 3 a.m. on Saturday in the Gresham neighborhood of Chicago’s South Side, police said.

About an hour after the double-homicide, police found an unidentified victim who had been shot in the chest in a gas station parking lot in the West Garfield Park neighborhood on the city’s West Side. The victim was taken to Mount Sinai Hospital, where he was pronounced dead.

Also killed over the weekend was a 32-year-old man who was shot in the head just before midnight on Friday in the Belmont Cragin neighborhood of northwest Chicago. Officers nearby heard the gunshots, responded quickly to the scene, and arrested an 18-year-old suspect they saw attempting to flee the area with a rifle, according to a police report.

Around 2:17 p.m. on Friday, a 19-year-old man died after being shot in the back during a drive-by shooting on the South Side of Chicago. No arrests were made in the homicide.