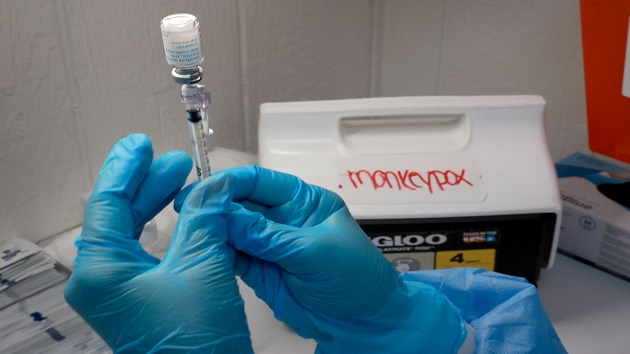 (CHICAGO) — Two Chicago residents died after being diagnosed with the monkeypox virus, the city’s Department of Health announced. The two were diagnosed with monkeypox over six weeks ago and had been hospitalized.

The two had several other health conditions, including weakened immune systems, city officials said. The two deaths were unrelated to each other, they said.

“Though the number of new MPV cases has declined substantially since summer, this is a stark reminder that MPV is dangerous and can cause serious illness, and in very rare cases, even death,” said Chicago Department of Public Health Commissioner Allison Arwady on Friday. “Our hearts go out to these individuals’ families and friends.”

Officials said they would not disclose any other information about the two cases, including where they were being treated, to protect their privacy.

The U.S. has reported over 27,000 cases and six total deaths due to monkeypox, according to the Centers for Disease Control and Prevention. Monkeypox cases have been reported in all 50 states.

The first confirmed case of monkeypox in the U.S. was reported in Massachusetts in May.

Monkeypox symptoms usually start within three weeks of exposure to the virus and the illness typically lasts two to four weeks, according to the CDC.

People with monkeypox get a rash that may be located on or near the genitals or anus and could be on other areas like hands, feet, chest, face or mouth. Other symptoms can include fever, chills, swollen lymph nodes, exhaustion, muscle aches and backache, headache and respiratory symptoms, according to the CDC.

Those infected may experience all or only a few symptoms. If someone has flue-like symptoms they will usually develop a rash one to four days later, the CDC says.

Officials said death due to monkeypox still remains rare. Among more than 75,000 cases reported in 2022, there have been 32 reported deaths, according to the World Health Organization.

She added, “Please continue to take it seriously. If you’re at risk of MPV infection, take prevention steps and get vaccinated to protect yourself and your loved ones. These measures are especially important if you have comorbidities and/or a weakened immune system.”

Chicago health officials encourage individuals who meet the eligibility criteria to get two doses of the monkeypox vaccine, 28 days apart.