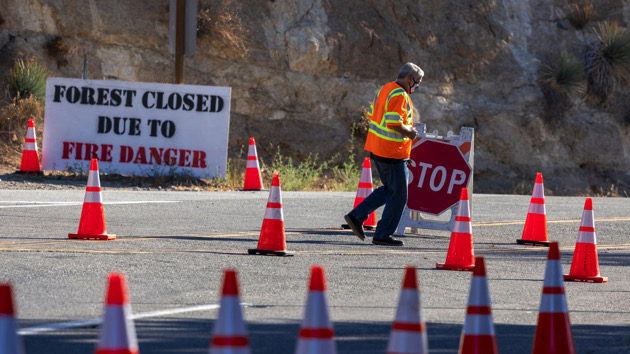 (SANTA FE, N.M.) — Two national forests in New Mexico are fully closed to the public due to extreme fire danger as several wildfires, including the largest in the state’s history, also burn.

The Carson National Forest and the Santa Fe National Forest in northern New Mexico are barring visitors, effective Thursday, due to fire risk that is only expected to get worse due to drought conditions.

“The hot and dry conditions we’re experiencing pose a dire risk for wildfires to quickly ignite and spread rapidly,” Carson National Forest supervisor James Duran said in a statement. “Community compliance will be essential for our success in protecting the forest amid these conditions.”

Campgrounds, trails and National Forest System roads in the forests are closed until conditions improve and there is “significant moisture,” forest officials said. The restrictions are currently scheduled to last until July 18.

Those who violate the closure order — a misdemeanor — could face a fine upwards of $5,000 or imprisonment.

The decision comes as over 2,100 fire personnel battle the massive Hermits Peak/Calf Canyon Fire east of Santa Fe, which this week became the largest fire in the state’s history. As of Thursday morning, the fire had burned over 303,000 acres and was 34% contained, state fire officials said. A red flag warning is in effect Thursday for hot, dry and windy conditions.

“Right now with the conditions as dry as they are, all it takes is a spark from an exhaust and you can have another huge fire happen,” Stefani Spencer of the Carson National Forest told Albuquerque ABC affiliate KOAT.

A third national forest in New Mexico — the Cibola National Forest and National Grasslands, west of Albuquerque — is also partially closed to the public due to extreme fire danger.

“The ongoing and adjacent Calf Canyon and Hermits Peak Fires have demonstrated the severity of current fire conditions,” the state’s Energy, Minerals and Natural Resources Department State Parks Division said in a statement.

Biden approved a disaster declaration earlier this month for New Mexico that brings financial resources to the areas battling the fires.