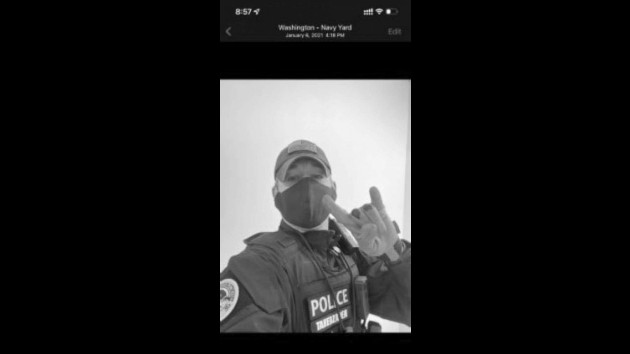 U.S. District Court for the District of Columbia

(WASHINGTON) — Four members of the United States Secret Service, including one member who was on first lady Jill Biden’s protective detail, were suspended after they allegedly associated with and were provided gifts from two men who are accused of pretending to be Homeland Security Investigations agents.

“All personnel involved in this matter are on administrative leave and are restricted from accessing Secret Service facilities, equipment and systems. The Secret Service adheres to the highest levels of professional standards and conduct and will remain in active coordination with the Departments of Justice and Homeland Security,” the Secret Service said in a statement Wednesday night.

Taherzadeh and Ali allegedly posed as “Special Police,” claiming “to be involved in undercover gang-related investigations as well as conducting investigations related to the violence at the United States Capitol on January 6,” according to court documents unsealed Wednesday night.

Taherzadeh went so far as to show someone who is identified in court documents as “Witness 1” an “HSI casefile” they were “working on” that was marked “confidential.” They even went so far as to have identical Chevy Tahoes fitted with police lights.

Another witness who was interviewed in court documents, and is on the first lady’s detail, was told by Taherzadeh that he was on a “covert task force” and he provided many favors to residents who were members of law enforcement. He also offered to gift the unnamed witness an AR-style rifle.

Additionally, the unnamed Secret Service agent on the first lady’s detail was told by Taherzadeh that he had the same agency gun the witness did.

Another witness, who is not named, allegedly saw Taherzadeh’s fraudulent Department of Homeland Security computer and Federal Training Center certificate.

The men told residents of the Navy Yard apartment complex where they lived that they were renting out apartments paid for by the DHS and set up a surveillance system around the apartment complex in which residents could access it at any time from their mobile device.

“These residents stated that they believe that TAHERZADEH and ALI had access to personal information of all the residents at the apartment complex,” court documents said.

One witness believed the two men had access codes to everywhere in the building due to them posing as law enforcement.

Taherzadeh allegedly walked up to another DHS employee who worked for HSI. However, when the employee looked him up in the database, he could not be found.

The investigation began when the suspects were witnesses to an assault involving a letter carrier and Postal Inspection Agents interviewed them.

The names of the suspended Secret Service members have not been released. The court documents did not say when these alleged interactions occurred.