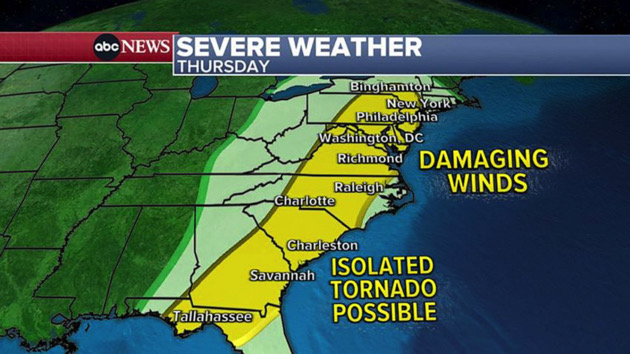 (NEW YORK) — Two people were killed Thursday in the Florida Panhandle when their mobile home was toppled by a suspected tornado, one of nearly 30 that has wreaked havoc across seven South and Midwest states, officials said.

The deaths in Washington County, Florida, were the first fatalities reported from the outbreak of severe weather that began Tuesday night.

The Washington County Sheriff’s Office said two mobile homes were destroyed, and the two people killed were inside one of them, according to ABC affiliate station WMBB in Panama City. Two other people in the second mobile home that was destroyed were injured, the sheriff’s office said.

The band of severe weather continued to move east and north, prompting severe weather warnings up the East Coast, including a forecast of potentially damaging winds Thursday evening for New York City, Trenton, N.J., and parts of eastern Pennsylvania.

The severe weather front that swooped in from the Rocky Mountains generated at least 29 tornadoes in seven states on Tuesday night and throughout Wednesday, according to the National Weather Service. Funnel clouds reportedly touched down in Florida, Arkansas, Mississippi, Louisiana, Texas, Alabama and Missouri.

One twister that tore through Springdale, Ark., on Wednesday injured seven people and caused heavy damage to an elementary school. The NWS reported that the Springdale tornado was a powerful EF-3 on the Enhanced Fujita Scale and produced winds of 145 mph.

Besides tornadoes, the severe weather front came with damaging winds that ripped roofs on homes, barns and businesses and uprooted trees.

In Louisiana, powerful winds and low visibility due to blowing debris was blamed for a three-car pile-up on a highway near Iota that caused several minor injuries, according to the Iota Police Department.

At least 10 twisters were reported across Mississippi and high winds toppled large trees outside the Governor’s Mansion in Jackson.

At least three tornadoes touched down in Central Alabama, including one that flipped over a mobile home in Shelby County, triggering a rescue of a person trapped inside, ABC affiliate station WBMA in Birmingham reported.

A twister also touched down in Montevallo, Alabama, Wednesday night, tearing the roof off a dorm at the University of Montevallo and injuring one person, according to the Montevallo Police Department.

“We are thankful that this week was spring break and that very few people were on campus during tonight’s storms,” university officials said in a statement.