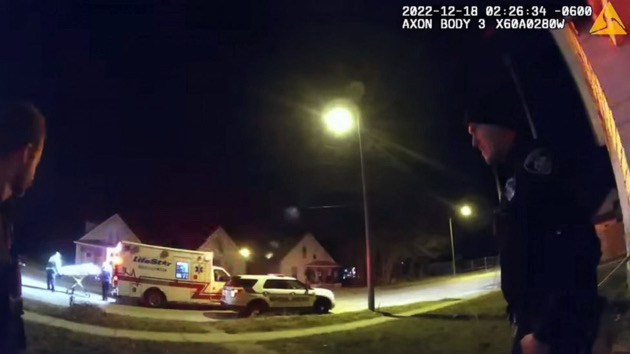 (SPRINGFIELD, Ill.) — Two EMS workers in Illinois are facing first-degree murder charges after a patient died in their care last month, according to the Springfield Police Department.

Dan Wright, the Sangamon County State’s Attorney, charged Peggy Finley and Peter Cadigan for the death of an Illinois man on Dec. 18, 2022, according to criminal complaints.

The EMS workers were responding to a call for assistance with a patient “suffering from hallucinations due to alcohol withdrawal,” the Springfield Police Department said in a statement.

Finley can be heard yelling at the man, who identified himself as Earl Moore, to sit up and to “quit acting stupid” in the newly released bodycam video.

Video also shows Finley telling Moore, 35, “We ain’t carrying you” and “I am seriously not in the mood for this dumb [stuff],” using an expletive in his remark, before eventually strapping the patient to a stretcher “in a prone position,” the police department said.

According to a press release from the Springfield police, officers attempted to provide Moore care after the EMS workers “acted indifferently to the patient’s condition.”

A representative for LifeStar Ambulance Service, Inc., which employs Finley and Cadigan, told ABC News “no comment,” regarding the ongoing investigation.

Bodycam footage additionally shows police officers attempting to help Moore out of the house and onto the stretcher.

“The officers took steps to assist the patient, to get him the care he needed, even waiting on the scene to ensure the medical personnel loaded the patient into the ambulance,” Springfield police said in a press release. “The officers, who are not emergency medical professionals, are not trained nor equipped to provide the necessary medical treatment or to transport patients in this type of situation.”

According to the Springfield Police Department, Moore died after he arrived at the hospital.

Teresa Haley, president of the Springfield branch of the NAACP, said at a press conference Tuesday held by Wright, that watching the video made her think about George Floyd, the Black Minneapolis man who was murdered by former police officer Derek Chauvin during a May 2020 arrest.

“They literally threw his hands behind and strapped him down. He couldn’t move if he wanted to and he’s face down,” Haley said. “They did not show any compassion whatsoever to this individual. He should be alive today.”

According to court documents, Finely and Cadigan are being held in the Sangamon County Jail on $1 million bonds.

Finley and Cadigan did not have attorneys listed that ABC News could contact.