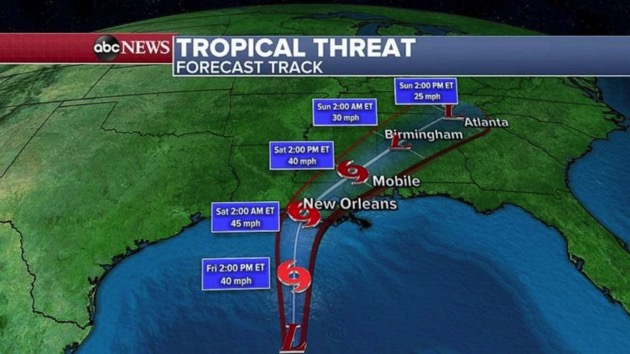 (NEW YORK) — A tropical threat churning in the Gulf of Mexico is taking aim at the Gulf Coast — and is forecast to strengthen into tropical storm Claudette.

Tropical storm warnings have been issued in Louisiana, Mississippi, Alabama and the Florida panhandle as the region prepares for heavy rain, gusty winds and potential flash flooding.

The heaviest rainfall may be just east of New Orleans into Mississippi and Alabama.

Five states from Louisiana to Georgia are on flash flood alert. Some areas could see near 1 foot of rain.

Meanwhile, unprecedented record heat is still scorching the western half of the country from the Plains to California.

Omaha hit 105 degrees — the first time the city reached that temperature in June since 1953.

Fifteen states from California to Illinois remain on alert for heat Friday — and more record highs are possible.

The heat in the West may finally subside Sunday into Monday, with highs forecast to be in the 80s in Sacramento and the lower 90s in Salt Lake City.