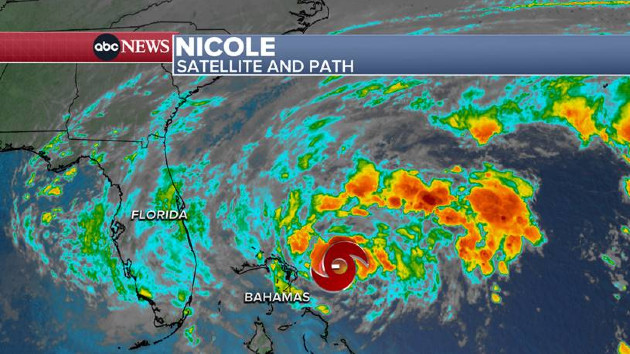 (NEW YORK) — Tropical Storm Nicole is forecast to strengthen into a Category 1 hurricane as it approaches Florida’s east coast.

The storm is expected to make landfall in the Sunshine State between the southeastern cities of Fort Pierce and Melbourne late Wednesday or early Thursday, according to the National Weather Service.

Nicole formed as a subtropical storm in the southwestern Atlantic Ocean on Monday, becoming the 14th named storm of the 2022 Atlantic hurricane season, which ends later this month.

Flagler County: Evacuation orders go into effect Wednesday at 3:30 p.m. local time for residents and visitors in Zone A, the barrier island from Flagler Beach to Marineland, as well as mobile homes and RVs countywide, according to the Flagler County Emergency Management.

Volusia County: Mandatory evacuations went into effect Wednesday at 10 a.m. local time for residents and visitors east of the Intercostal Waterway, all mobile homes east of Interstate 95, all low-lying areas and other areas prone to flooding as well as all campsites and RV recreational parks, according to the Volusia County Emergency Management.

Palm Beach County: Mandatory evacuations went into effect Tuesday at 7 a.m. local time for Zones A and B, including mobile homes, barrier islands and low-lying areas, according to Palm Beach Mayor Robert Weinroth.

Nov 09, 9:55 AM EST
Nicole close to hurricane strength as it heads for Florida

Tropical Storm Nicole barrelled toward the northwestern Bahamas and eastern Florida on Wednesday morning, with maximum sustained winds near 70 miles per hour — almost as a strong as a hurricane, according to the latest forecast from the National Weather Service.

To be classified as a hurricane, a tropical cyclone must have maximum sustained winds of at least 74 mph.

The center of Nicole is forecast to approach the northwestern Bahamas on Wednesday morning, move near or over those islands by midday, then approach the east coast of Florida within the hurricane warning area on Wednesday night. The storm’s center is expected to move across central and northern Florida into southern Georgia on Thursday, then across the Carolinas on Friday.

“Some strengthening is expected today, and Nicole is forecast to become a hurricane near the northwestern Bahamas and remain a hurricane when it reaches the east coast of Florida tonight,” the National Weather Service said in a public advisory on Wednesday morning. “Nicole is expected to weaken while moving across Florida and the southeastern United States Thursday through Friday, and it is likely to become a post-tropical cyclone by Friday night over the Mid-Atlantic states.”

As of early Wednesday, Nicole was already spreading gusty winds and rain showers into Florida, where it is later expected to make landfall between the southeastern cities of West Palm Beach and Melbourne as either a tropical storm or a Category 1 hurricane. Its tropical storm-force winds currently extend outward up to 460 miles, especially to the north of the center. In the early morning hours, a National Ocean Service station at the Lake Worth Pier, just south of West Palm Beach, reported sustained winds of 44 mph and a wind gust of 55 mph, according to the National Weather Service.

Because Nicole is so close to hurricane strength, the National Weather Service has issued hurricane and storm surge warnings along Florida’s east coast from Daytona Beach to West Palm Beach. Meanwhile, Miami is under a tropical storm watch and tropical storm warnings have been issued for Florida’s west coast as well as from Jacksonville up through Savannah, Georgia, to Charleston, South Carolina.

The areas that will see the heaviest rainfall will be right where the storm touches down on Florida’s east coast, with the potential for up to 8 inches of localized rain. Heavy rain will track north and inland, into Georgia, the Appalachian Mountains from Tennessee and North Carolina to Pennsylvania and into western New York where more than 4 inches of rain is possible.

President Joe Biden on Tuesday night approved an emergency declaration for Florida due to conditions resulting from Tropical Storm Nicole, according to the White House.

The emergency declaration authorizes the Federal Emergency Management Agency to coordinate all disaster relief efforts. Specifically, FEMA is authorized to identify, mobilize and provide at its discretion equipment and resources necessary to alleviate the impacts of the emergency, according to the White House.