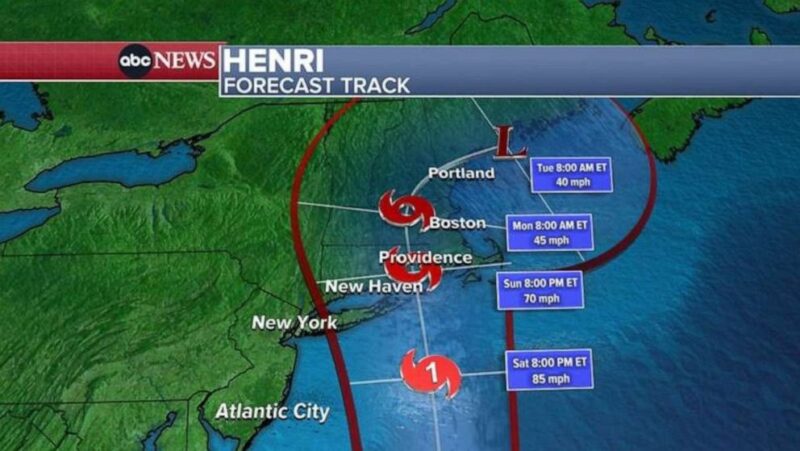 (NEW YORK) — Tropical Storm Henri is expected to become a hurricane on Saturday as it accelerates quickly up the East Coast toward southern New England.

Henri is predicted to touch down near Long Island and southeastern New England on Sunday afternoon, with winds nearing 75 miles mph.

Since the coastal Northeast is very close to the sea level, these areas are prone to flooding amid storm surge, which could reach as high as 4 feet in Queens and Long Island, as well as coastal Connecticut. In Rhode Island and southeast Massachusetts, the storm surge could reach 5 feet.

From Newport, Rhode Island, to Montauk, New York, wind gusts are forecast to reach up to 80 mph, and they may reach 60 mph in other coastal areas.

It’s the first time in nearly 10 years that parts of New York have been issued a hurricane watch, according to the National Weather Service, which also noted that if Henri lands in New England as a hurricane, it’ll be the first direct hurricane landfall since 1991.

Fred, a tropical depression that passed by earlier this week, caused major flooding in parts of Connecticut and Massachusetts, areas that could see another 6 to 8 inches of rain from Henri.