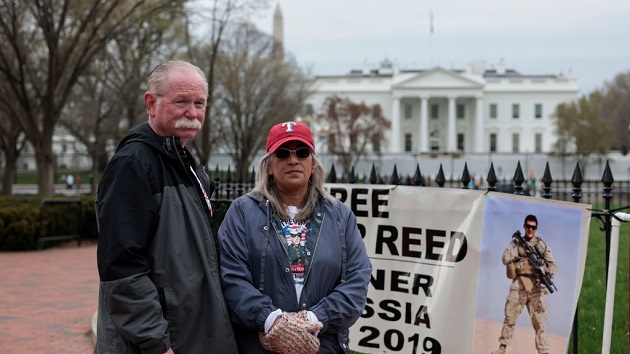 (WASHINGTON) — Trevor Reed’s time inside a Russian prison may be over, but his parents said they are still concerned about his well-being and his long road to recovery.

Hours after Reed was released from a Russian prison as part of an international prisoner exchange, the former Marine’s parents spoke with ABC News’ Anchor David Muir and said they are relieved that his nearly three-year captivity has come to an end.

However, Joey and Paula Reed said they are very concerned about their son’s physical and mental recovery.

“Trevor left here, young, virile, in good shape, good condition. And he’s not, he’s not coming home that way. So that’s our concern about his health.” Joey Reed told Muir during an interview on “World News Tonight” Wednesday.

The parents lobbied for years for the U.S. to negotiate for their son’s release, going as far as to personally plead with President Joe Biden to act. On Wednesday, their requests were fulfilled.

“Today, we welcome home Trevor Reed and celebrate his return to the family that missed him dearly,” Biden said in a statement. “Trevor, a former U.S. Marine, is free from Russian detention. I heard in the voices of Trevor’s parents how much they’ve worried about his health and missed his presence. And I was delighted to be able to share with them the good news about Trevor’s freedom.”

Reed’s ordeal started in 2019 when he was visiting his girlfriend in Moscow. The 30-year-old was arrested after Russian authorities alleged Reed grabbed the wheel of a police car and assaulted a police officer while drunk.

One year later, Reed was sentenced to nine years in a Russian penal colony. After several appeals, Reed was moved from a prison in Moscow to a remote prison colony.

On March 30, the Reeds protested outside the White House asking for an audience with President Biden.

Biden did meet with the family after their demonstration and the couple told ABC News they felt the president was mindful of their requests.

On Wednesday video and photos of Reed being escorted out of prison and into a plane were released.

The Reeds said they cried when viewing that footage of their son, who they said looked weak and had trouble walking.

The family said their priority is to ensure their son regains his health.

“He just looked terrible to us,” Paula Reed said.