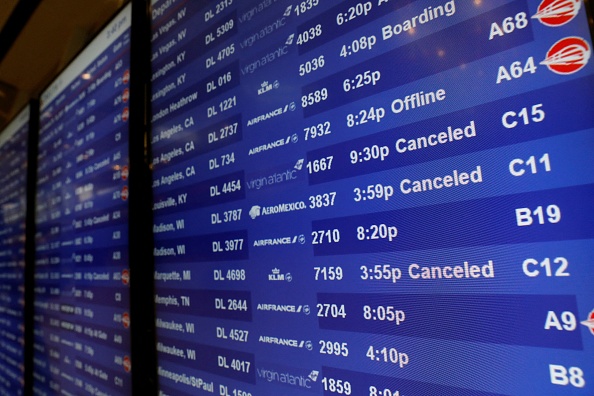 (NEW YORK) — A massive storm is bringing blizzard conditions and icy roads to the U.S. right as the holiday travel rush gets underway.

Over 4,800 flights are canceled within, into or out of the U.S. so far on Friday.

FedEx and UPS warned that customers could see delays on Christmas deliveries due to the weather’s impact on major shipping hubs.

More than 1.5 million customers are without power in the U.S. and states of emergency have been declared from South Dakota to New York.

Danger on the roads

At least one person is dead from a 50-vehicle crash on the Ohio Turnpike, according to the Ohio State Highway Patrol.

State police, including in New York, Illinois and Michigan, are urging people to stay off the roads.

The Michigan State Police said nine semi-tractor trailers crashed on Interstate 94 in Berrien County, where “visibility is near zero.” A seven car pileup was reported in the same area, according to police.

“There are thousands of our first responders, emergency management personnel and utility crews out working in the elements to keep New Yorkers safe today,” New York Gov. Kathy Hochul said in a statement Friday. “I’m asking everyone to stay off the roads this evening as conditions will worsen when temperatures drop across the state later today. Bundle up, stay indoors, and stay safe this weekend.”

The storm barreled across the Midwest and Great Lakes on Thursday.

Blizzard conditions will continue in the Great Lakes into Friday.

Several feet of snow could drop in Michigan and western New York.

Only a few inches of snow is expected for the rest of the Midwest. But the combination of the snow, wind and brutal cold will make travel extremely dangerous throughout the day Friday.

The heavy rain is ongoing in New England.

As the temperature plunges on Friday, roads could turn to ice, so those hitting the road for the holidays should use extreme caution.