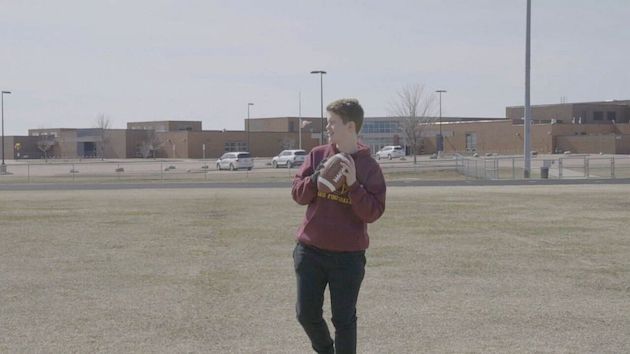 (NEW YORK) — When 13-year-old Kris Wilka was younger, he would watch football games at his cousin’s house. This tradition, he says, sent him spiraling into playing the sport himself.

“It was very fascinating to me. Like, all the different things that would go into making a play and executing a play,” he told “Nightline.” “It kind of spiraled from there… When I was in second grade, I went straight to tackle football — I never played any flag [football] — and I was quarterback for two years in my league, and then I was on the line my third year. I got recruited to a new league, played a year there.”

Now Kris plays quarterback at Harrisburg North middle school in Sioux Falls, South Dakota. Like so many of his teammates, he can’t imagine life without the sport and his team. However, he may soon be forced out of playing football. Unlike his teammates, he was assigned female at birth.

“He was a boy … ever since he was able to walk, talk, emulate, act,” Kris’ father John Wilka said. “He was a boy… [He] was transgender. That is what he was.”

After failed negotiations in March between South Dakota Republican Gov. Kristi Noem and the state’s representatives, Noem killed a bill she previously signaled support for – the bill would have banned transgender women and girls from female sports, including enforcement policies and requirements for schools to receive documentation of athletes’ sex at birth.

Noem asked lawmakers to revise the language over concerns the bill would not survive legal challenges. She faced swift backlash from conservatives and could not come to an agreement with state representatives. Noem then issued two weaker executive orders that essentially recommended that public schools and universities require documentation showing athletes were born female.

“Only girls should play girls’ sports,” Noem tweeted of the orders.

Kris, who is only in the seventh grade, decided to testify against the bill and his story spread like wildfire.

“The main reason why I’m using my voice is so that I can speak for others that may not be able to use their own,” he said. “I want to be an outlet or a source of comfort, and to let people know that you’re not alone.”

Kris’ parents have cautioned him about going public with his gender identity.

“Every step along the way, we’ve told Kris, ‘Kris, you don’t have to do this because you’re putting yourself out there.’ Because, on social media, a lot of hurtful things [have been] said about him by these so-called grown ups and adults,” Wilka said. “Every step of the way, though, Kris’ message has been, ‘Mom and dad, if I don’t speak up for me, who’s going to?’”

Kris says he considers all people in the trans community to be his family.

“We[‘ve] got to stand up for each other and with each other,” he said. “I don’t think they’re thinking that we’re all humans, we all have emotions… They need to know that … we’re not different in that aspect that we’re humans.”

Kris says football has earned him his closest friends, and taught him discipline and how to work with others. He also says it’s a crucial personal safe space.

“It’s where I can be myself the most. It’s where I can sometimes escape from school or something,” he said. “It’s a place that I can feel like I belong. And, without football, without that safe place, there isn’t really — I mean, there’s my family, there [are] my teachers — but there isn’t really somewhere that I can go to escape a lot of things.”

His mother, Jena Wilka, says she’s glad he has been able to play the sport but she fears it will be taken away.

“I worry about that a lot. I think about it a lot,” she told “Nightline.” “As he gets older we don’t really know what he would do without football as an outlet. So I’m hoping that we keep that going as far as kids just being kids, kids just playing sports and being children.”

John Wilka added that if his son were to stop playing because an authority figure told him to, he wants it to be a coach, not a politician.

“You know, when a coach says, ‘Well, you’re not good enough for the team,’ whatever age that may be,” he said. “I just don’t [want] some legislator that doesn’t play sports to do that.”

Kris said his coaches were some of the first people he’d told about being transgender. Afterward, one of the first questions they asked was about which position he’d feel best playing.

“They made me do push ups when we all had to do push ups, they never stopped me from doing anything more than the other kids,” Kris said. “They completely just went over me being transgender and they treated me like another kid on the team.”

Kris hopes to try out for quarterback next year.

“The quarterback is who people look up to for direction,” he said. “You have to remember what will go down in the play and make sure it will go smoothly and make sure your line is behind the ball. … There’s a lot that goes into it, but it’s definitely rewarding.”