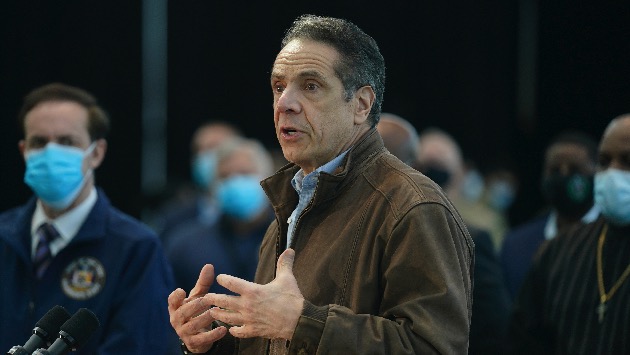 Anna Ruch, 33; Lindsey Boylan, 36; and Charlotte Bennett, 25, have come forward over the past week to accuse the governor of unwanted advances over a time period from December 2016 to June 2020.

The allegations are only adding to Cuomo’s political woes as his administration is under investigation for its handling of nursing home deaths during the pandemic.

His fall from public grace comes after he emerged early in the pandemic as a star among Democratic leaders for his handling of the coronavirus crisis.

Boylan, a former aide to Cuomo, was the first to accuse the governor of sexual harassment and kissing her against her will.

In December, she wrote a series of tweets sharing her allegations for the first time.

She tweeted, “Yes [Cuomo] sexually harassed me for years. Many saw it, and watched.”

“I could never anticipate what to expect: would I be grilled on my work (which was very good) or harassed about my looks,” she continued. “Or would it be both in the same conversation? This was the way for years.”

At the time, the governor denied the accusations.

“I believe a woman has the right to come forward and express her opinion and express issues and concerns that she has,” Cuomo said in December. “But it’s just not true.”

Boylan expanded on the allegations in a Medium piece in which she accused Cuomo of acting inappropriately with her when she worked for the state’s economic development agency.

Boylan said she first encountered the governor in January 2016 and her boss at the economic development agency informed her Cuomo had a “crush” on her.

In October 2017, Boylan alleged that Cuomo invited her to play strip poker as they were on a government plane together.

One year later, Boylan said she was promoted to deputy secretary for economic development and special adviser to the governor, a position she initially turned down “because I didn’t want to be near him.” She ultimately accepted following Cuomo’s insistence.

She also alleged that Cuomo kissed her on the lips without warning on one occasion in 2018 at his New York City office.

“As I got up to leave and walk toward an open door, he stepped in front of me and kissed me on the lips,” Boylan wrote. “I was in shock, but I kept walking.”

She resigned in September of that year.

“There is a part of me that will never forgive myself for being a victim for so long, for trying to ignore behavior that I knew was wrong,” Boylan said. “The Governor exploited my weaknesses, my desire to do good work and to be respected. I was made to believe this was the world I needed to survive in. … It was all so normalized … that only now do I realize how insidious his abuse was.”

When approached by The New York Times for comment on her claims, Cuomo’s press secretary, Caitlin Girouard, dismissed them as “quite simply false.”

She accused Cuomo of sexual harassment, alleging he asked questions about her sex life.

Bennett, who was first hired by Cuomo’s administration in early 2019, worked as an executive assistant and health policy adviser until November when she left his office.

Bennett alleged that on June 5 she was alone with Cuomo in his state Capitol office when he allegedly asked her questions about her personal life that she interpreted as insinuating a sexual relationship.

He asked her if she thought age made a difference in romantic relationships, whether she was monogamous in her relationships and if she ever had sex with older men.

In that June meeting, she said Cuomo made her uncomfortable when he allegedly complained about being lonely in the pandemic and said he “can’t even hug anyone” and asked, “Who did I last hug?”

“I understood that the governor wanted to sleep with me, and felt horribly uncomfortable and scared.” Bennett told the Times. “And I was wondering how I was going to get out of it and assumed it was the end of my job.”

She shared what happened with Cuomo’s chief of staff, Jill DesRosiers, and was transferred less than a week later to another job within the administration in a different part of the Capitol. She gave a statement to a special counsel to the governor that same month.

In the end, Bennett said she decided against pushing an investigation because she liked her new job and “wanted to move on.”

In response to her allegations, Cuomo stated in a press release: “I never made advances toward Ms. Bennett nor did I ever intend to act in any way that was inappropriate. The last thing I would ever have wanted was to make her feel any of the things that are being reported.”

Cuomo said Bennett was a “valued member” of his staff with “every right to speak out” and he disclosed that Bennett had spoken to him about being a survivor of sexual assault.

“The last thing I would ever have wanted was to make her feel any of the things that are being reported,” the statement added.

Bennett left state government in the fall and now lives and works in a neighboring state.

The same day Bennett’s account was published, the governor named former federal judge Barbara Jones to conduct a review of the claims. However, the move faced backlash and state leaders demanded an independent probe.

Cuomo bent to pressure and asked New York Attorney General Letitia James for a formal referral to create a special counsel with subpoena power to investigate the claims against him.

He issued a statement Sunday saying, “I never intended to offend anyone or cause any harm.”

He added that some of his comments “may have been insensitive or too personal,” “made others feel in ways I never intended” and “have been misinterpreted as unwanted flirtation.”

That same day, New York City Mayor Bill de Blasio, who has clashed with the governor in the past, issued a statement denouncing Cuomo’s alleged behavior, saying, “the State legislature must immediately revoke the Governor’s emergency powers that overrule local control.” He called for two fully independent investigations into the personal misconduct allegations and deaths at nursing homes.

New York state Sen. Alessandra Biaggi also denounced the governor’s behavior, telling on ABC News his alleged behavior was “inappropriate.” She had called on the governor to resign on Feb. 27.

“It’s abusive and it scares people because it’s terrifying and the governor of New York should not be acting that way,” Biaggi said.

The New York Times published an account of alleged misconduct from Ruch. Unlike Boylan and Bennett, she did not work with Cuomo.

She met him at a wedding reception in New York City in September 2019 and alleged Cuomo placed his hands on her bare lower back and face and “asked if he could kiss her.” She also shared a photo of the alleged incident with the paper.

She said the incident left her “uncomfortable and embarrassed” and she felt she “didn’t have a choice in that matter.” Cuomo ended up kissing her on the cheek, according to Ruch.

James also announced on Monday that her office would begin an independent investigation, which included subpoena power, into allegations of sexual harassment against the governor. James’ office told ABC News Monday evening it read Ruch’s account in the Times and will decide whether to incorporate it into the just-launched investigation.

Rep. Kathleen Rice has become the first New York Democrat in Congress to join mounting calls for Cuomo to resign in wake of the allegations.

In a statement shared with ABC News, the lawmakers said Cuomo used his power to “belittle, bully and harass his employees and colleagues” and impeachment proceedings “are the appropriate avenue” for accountability. It further states Cuomo’s withholding of information in regards to nursing home deaths is “sufficient to justify impeachment proceedings.”

The New York Attorney General’s Office opted to incorporate Ruch’s account into the ongoing investigation into Cuomo, a source familiar with the matter told ABC News.

The attorney general’s office will not limit the scope of the probe in case additional allegations surface. At the end of the investigation, a public report will be released.

Karen Hinton, Cuomo’s former press aide, accused him of inappropriate behavior. Her account was published by the Washington Post on March 6.

She claimed Cuomo, who at the time led the U.S. Department of Housing and Urban Development, summoned her to his dimly-lit hotel room in Los Angeles and embraced her with a “too long, too tight, too intimate” hug after a work event in December 2000. She was a consultant for the agency at the time.

Hinton, who was married at the time, claimed she pulled away from Cuomo, “but he pulled her back toward his body.”

Hinton’s second husband Howard Glaser worked for Cuomo at HUD. He served as a top deputy to Cuomo in the governor’s mansion for five years.

Also, on Saturday, a fifth woman, Ana Liss, who served as a policy and operations aide to Cuomo from 2013 to 2015, came with allegations against Cuomo that were published by the Wall Street Journal.

She said the governor asked her if she had a boyfriend, called her sweetheart, touched her on her lower back at a reception and once kissed her hand as she rose from her desk.

“It’s not appropriate, really, in any setting,” Liss said to the Journal.

The Albany Times-Union reported that a sixth woman, a member of the governor’s Executive Chamber staff, accused Cuomo of inappropriate conduct.

The staffer, who has not been named, accused the governor of inappropriately touching her late last year during an encounter at the governor’s mansion after she had been summoned there to do work.

She had not filed a formal complaint with the governor’s office. Her claims were recently reported to the governor’s counsel by other Executive Chamber employees, the Times-Union reported.

Cuomo’s acting counsel, Beth Garvey, said in a statement to the Times-Union, “All allegations that we learn of directly or indirectly are going promptly to the investigators appointed by the attorney general.”

Cuomo said he was unaware of the sixth claim against him during a Tuesday call with reporters.