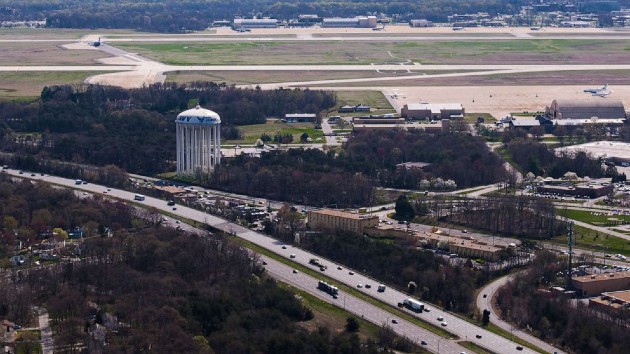 (WASHINGTON) — Three major security failures allowed an intruder to drive on to Joint Base Andrews without authorization, meander for hours, access the flight line and eventually walk aboard a military aircraft that is part of the same unit responsible for maintaining and flying Air Force One, before being detained, according to new details from the Air Force Inspector General about the Feb. 4 breach.

“The first one — and the one that really should have stopped this ball from rolling in the first place — is obviously the gate,” Air Force Inspector General Sami Said told reporters Thursday. “We had a security forces airman that allowed this individual on base without checking proper credentials.”

The fully trained gate guard admitted to complacency and has faced disciplinary action, according to Said, who would not specify the details of that action.

After driving on base at 7:16 a.m., the 36-year-old intruder took an unknown route to the base exchange, where he was recorded on surveillance cameras walking through the food court, according to the report, released Thursday afternoon. After about an hour there, he left the commissary parking lot in his vehicle.

His whereabouts during the following two hours are unknown.

The man was next seen at 11:45 a.m. at the 89th Airlift Wing passenger terminal, looking out the glass doors toward the flight line, according to the report. The 89th Airlift Wing is responsible for flying the president aboard the VC-25 aircraft — commonly referred to as Air Force One — as well as the vice president, Cabinet members and other senior officials with its fleet of planes.

One person asked if he needed any help and the man said something about needing a ride and walked back outside, according to the report. The person in the terminal watched him cross the street, where he appeared to be waiting for a ride. Twenty-three minutes later, the second layer of security failed.

“The second point of failure is, how does he get on the flight line? Because the flight line is surrounded by a high fence,” Said said. “And we found the point of entry, which is a gate that was left partly open.”

It wasn’t the first time the gate had malfunctioned.

The same entry control point gate had six malfunctions reported in the year before the breach, including one just weeks prior in which it failed to fully close. The gate was adjusted and seemed to be working fine, but seems to have suffered the same malfunction on Feb. 4, leaving an ample 18-inch gap to walk onto the flight line.

Next the intruder calmly walked about 500-700 feet to air stairs leading up to the open main door of a C-40 aircraft, which was positioned for trainees to access, and boarded the aircraft. This is where the third major security failure occurred.

Two air crew members who were training on board watched the intruder walk to the back of the plane and exit a few minutes later. They notified no one.

The man “walked confidently past both aircrew members and proceeded to the back of the aircraft,” the report said, adding that the airmen were focused on training and did not notice his lack of a restricted-area badge. The man did not say anything while aboard, according to the air crew.

Security forces in the area should have seen and detained the man, but were parked in an area that blocked their view of the C-40, the report concluded.

Two airmen back at the terminal who had encountered the man compared notes and decided that his presence presence was odd and that he didn’t quite seem to belong on the base.

Said told reporters Thursday that while the intruder was not dressed to deliberately blend in, much of his clothing was similar to what is often worn by civilian contractors on base. But he also had an out-of-place knit cap with something resembling ears on it, according to Said.

“(The intruder) was wearing dark pants, a dark jacket, black high top sneakers, and carrying a brown backpack,” the report said. “On his head, he had a bright red or pink cap that partially covered his ears and had distinctive balls on top that looked a little like mouse ears.”

The airmen in the terminal, one of whom spotted the intruder from a distance on the flight line, called the base defense operations center about a possible unauthorized person. Security forces were alerted and detained the intruder within two minutes.

He had been on base for more than five hours.

Aside from a pair of wire cutters left in his car, the report found no evidence the intruder was assisted in accessing the base or had any intention to cause harm.

“During questioning, (the intruder) said he came on base because he wanted to see airplanes,” the report said.

The report said there was no sign the man was under the influence of alcohol or other drugs, though he made disjointed statements and initially told them he couldn’t remember exactly how he got on base. In a follow-up interview with Air Force investigators, the man was more evasive and claimed to have been under the influence and to remember nothing about being at the military installation, according to the report.

The report said that a review of the National Criminal Information Center revealed an extensive arrest history and an active warrant for his arrest. A redacted source mentioned in the report stated that he was homeless and living out of his car.

The man, a civilian with no history with the base or the military, was handed over to Prince George’s County Police Department on the evening of the Feb. 4.

The report concluded that base failures similar to those of the Feb. 4 breach would not have compromised the security of higher-priority aircraft such as Air Force One, which are under heavier security.

Shortly after the incident, the Air Force announced a security review of its bases across the world. That review began about two weeks ago, according to Said.