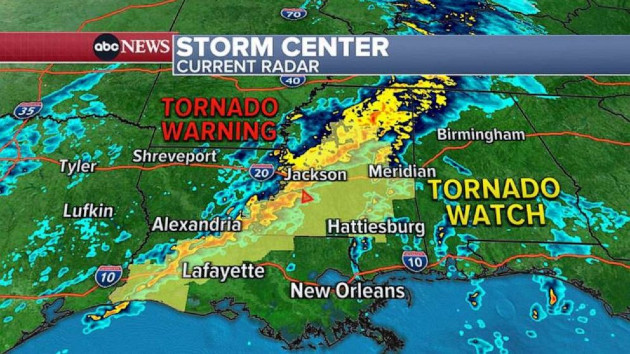 (NEW YORK) — Three people are dead in the wake of tornadoes that swept through Louisiana, according to the state Department of Health.

The latest fatality was reported in St. Charles Parish on Wednesday evening. A 56-year-old woman died after a tornado “destroyed her house in the Killona area,” the state Department of Health tweeted, noting that the fatality brings the total number of confirmed storm-related deaths to three.

The woman was found outside her home, and authorities have not yet confirmed her cause of death, St. Charles Parish Sheriff Greg Champagne said.

Several other people are seeking treatment at St. Charles Hospital for non-life-threatening injuries in the wake of the storm, Champagne said.

Authorities believe a tornado touched down at 2:21 p.m. near Nelson Coleman Correctional Facility in Killona, St. Charles Parish President Matthew Jewell said. The tornado then moved north toward Montz, with surveys of preliminary damage suggesting that the worst of the damage is in Killona, Jewell said.

“This community got hit really hard during Ida,” Champagne said. “They didn’t need this again.”

At least 15 to 20 families in Killona have had their homes damaged by the storm, Jewell said.

The sheriff called Wednesday’s storm “horrific and violent,” as authorities continue their search-and-rescue efforts. “They just can’t seem to catch a break,” he said.

The deadly tornado in St. Charles Parish comes after a woman and her 8-year-old son were killed when a tornado swept through their town on Tuesday, officials said.

The body of Yoshiko Smith, 30, was found under debris one street over from her destroyed home in Keithville, according to the sheriff’s office and coroner’s office in Caddo Parish.

The body of her son, Nikolus Little, was found in a wooded area near their house, officials said.

Both were killed by blunt force trauma, according to the Louisiana Department of Health.

These deadly tornadoes were among at least 42 reported twisters across the South since Tuesday afternoon. More tornadoes are expected on Wednesday overnight and Thursday as the storm moves east.

Four people in New Orleans were injured after a possible tornado touched down near the West Bank of the Mississippi River, Collin Arnold, director of New Orleans Homeland Security & Emergency Preparedness, told ABC News on Wednesday.

All four who were injured were transported to area hospitals, Arnold said, adding that none were children and all are in stable condition.

Damage assessments continue, Arnold said, but there are currently several downed power lines in Algiers caused by the strong winds of the storm, making it difficult for crews to safely restore power and survey all possible damage.

Officials in St. Bernard Parish, east of the French Quarter, confirmed that a tornado touched down in Arabi and caused significant damage. Police and firefighters were assessing the damage.

Nearly 45,000 customers were without power as of Wednesday night, according to electric company Entergy.