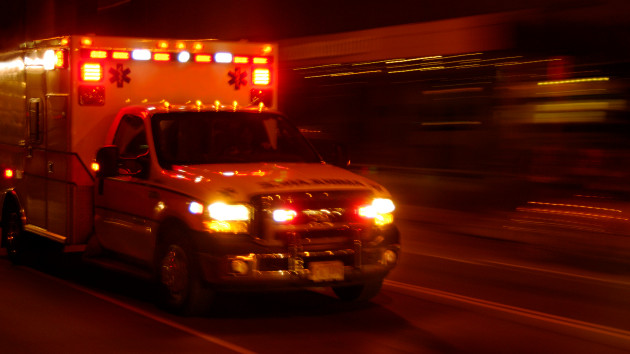 (NEW YORK) — A 73-year-old man wielding a semiautomatic handgun opened fire Sunday at his luxury condo building in a suburb near Toronto, killing five neighbors, including two members of his condo board and a former member of the panel, police said.

Another victim was injured in the shooting in Vaughan, a city north of Toronto, according to York Regional Police.

At a news conference Monday, Chief Jim MacSween of the York Regional Police Department identified the alleged gunman as Francesco Villi, a resident of the 16-story Bellaria condominium tower where the shooting rampage occurred.

He said Villi was fatally shot in an “interaction” with police on the third floor of the condo tower.

MacSween said three men and two women were killed in the shooting. He said three victims were members of the building’s condo board.

Those killed in the shooting were identified by police as Rita Camilleri, 57; Vittorio Panza, 79; Russell Manock, 75, and his wife, Helen (Lorraine) Manock, 71; and Naveed Dada, 59. Camilleri and Dada were both sitting members condo board, officials said. Russell Manock was a former board member.

MacSween had said the victims were found in three separate units of the building. He said a 66-year-old woman was shot and seriously injured in the incident.

John Di Nino, the president of the condo board, confirmed at a news conference Tuesday that his wife, Doreen Di Nino, is a victim who survived the attack. He said she is in a hospital in serious but stable condition. Di Nino, who is also president of the powerful Amalgamated Transit Union in Canada, expressed condolences to the five people killed.

“Not only were they residents, they were my friends, every one of them,” Di Nino told reporters. “Our family has been put into shambles over a senseless act of violence that could have been avoided.”

Di Nino said he was with his wife at the time she was shot in their apartment. While he declined to disclose details of the shooting, he said, “My wife was an innocent bystander.”

MacSween said previously a motive for the shooting remains under investigation.

“We are truly shocked and sorry that such an incident took place in our region,” MacSween said. “We will do anything we can to support the loved ones and anyone else impacted by this heartbreaking incident.”

MacSween has also declined to confirm reports that Villi was engaged in an ongoing dispute with his condo board. He said part of the investigation will focus on what relationship Villi had to the victims and “what is his relationship to the board.”

The shooting unfolded around 7:20 p.m. Sunday when police received a call of an active shooter at the condo building, MacSween said. An officer who responded to the scene had an “interaction” with the alleged gunman, who was shot and killed, MacSween said.

“The officer in that interaction is a 24-year veteran of the York Regional Police, and he very likely saved lives by his actions last night,” MacSween said.

The Ontario’s Special Investigations Unit, which joined the probe because it involved police shooting the suspect, said the victims were found on different floors of the building.

“Residents of the building who had been evacuated are now able to return to their homes,” York police said on Twitter. “We thank you for your patience and understanding while we worked to ensure safety and preserve evidence.”