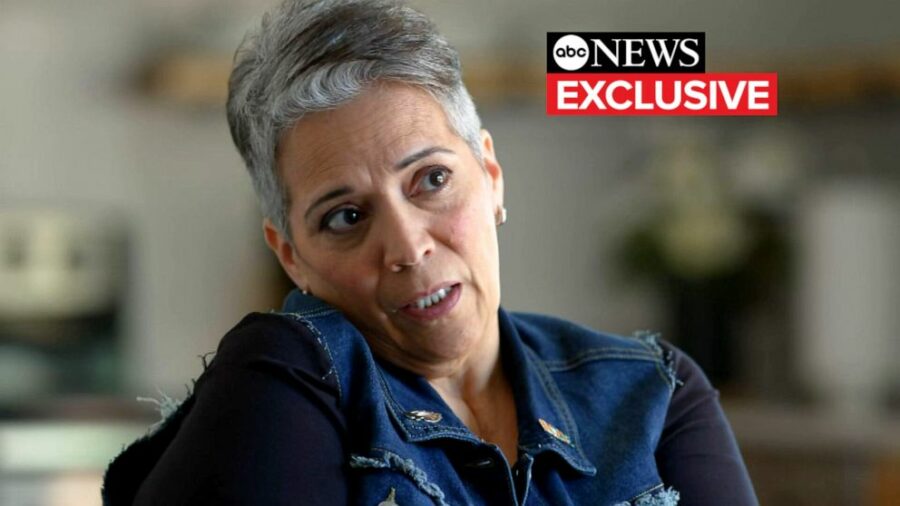 (UVALDE, Texas) — Emilia “Amy” Marin watched a briefing on the Robb Elementary school shooting on May 27, three days after the rampage that killed 19 students and two teachers.

She listened live as Col. Steven McCraw, director of the Texas Department of Public Safety, told dozens of reporters and millions of viewers watching live that a “teacher” had propped the door open with a rock, allowing the shooter to enter the school through a door that was supposed to lock automatically.

“He’s lying. That’s a lie,” Marin said to her daughter, who was watching with her.

Though unnamed at the time, Marin was the woman McCraw was talking about. Marin was an afterschool program coordinator at the time of the Robb shooting.

Months later, Marin is still waiting to hear how and why the false accusation was broadcast to the nation.

“Nobody is going to point the finger at me because I know what I did,” Marin told ABC News correspondent John Quiñones. “I knew what I did from day one.”

Three days later, DPS retracted that statement, but that was not until after many in the community had blamed Marin for the attack. In the months since, community members and state politicians have criticized DPS for that mistake.

“They’re either incompetent or they are dishonest,” said Don Flanary, Marin’s lawyer, about the department. “Neither is acceptable.”

DPS has not offered an explanation on how the error was made or the route it took to reach McCraw. DPS officials declined to respond to questions for this report about the origin of the mistake and have referred ABC News to the agency’s prior statements and apology.

In a previous statement to ABC News, DPS spokesman Travis Considine explained: “At the outset of the investigation, DPS reported that an unnamed teacher at Robb Elementary School used a rock to prop open the door that the shooter used to enter the school building. It was later determined that the same teacher removed the rock from the doorway prior to the arrival of the shooter, and closed the door, unaware that the door was unlocked.”

Considine said, “DPS corrected this error in public announcements and testimony and apologizes to the teacher and her family for the additional grief this has caused to an already horrific situation.”

McCraw testified during a state Public Safety Commission hearing last week. “At the time, that’s exactly the information that we had. It was wrong,” he said. “I take responsibility for it.”

Security camera footage obtained by ABC News shows Marin placing the rock in the doorway only to return and kick it away a few minutes later. She closed the door behind her.

“If you’re an investigator, you’re sitting there watching that video and you saw me walk out,” Marin told ABC News. “Why didn’t you sit there and watch the whole video to see if I ran back in?”

“Obviously I should have apologized a lot sooner,” McCraw said at that public safety meeting. “I did say the teacher pushed the rock or put placed the rock in the door. I said that on that Friday and didn’t correct it until the next week.”

During last week’s hearing, state Sen. Roland Gutierrez, who represents Uvalde, said Marin was deeply traumatized by the assertion that her actions gave a killer access to Robb Elementary.

“She was haunted by this in her own hometown,” Gutierrez told ABC news.

“And that happened because (DPS) defamed her,” he said. “They defamed her.”

Gutierrez told the commission that the explanation of a simple mistake was unconvincing and hard to believe because, in the first days after the school shooting, he said he personally watched as a team of DPS investigators reviewed surveillance camera footage closely.

In an interview with ABC News, Gutierrez elaborated, saying he watched 10 troopers in their signature DPS cowboy hats closely examining video captured that day. Though he couldn’t say exactly which videos he saw them reviewing, he watched as they scrutinized the footage, repeatedly rewinding, fast-forwarding and slowing portions of video. He said the detailed analysis of the evidence that he witnessed contradicts the information McCraw was given prior to the briefing Marin watched with her daughter on May 27.

“It defies logic that these people didn’t know the truth as to what Amy Marin did or didn’t do,” Gutierrez said. “When they accused Amy Marin, they knew that she absolutely did the right thing and yet they let her feel the pain of that accusation for five days, and she will never be the same.”

Marin told ABC News that an FBI agent and a Texas Ranger interviewed her before McCraw went on television with his inaccurate statements about her actions. She told the officers at that time what happened on the day of the shooting, including her shutting the door behind her.

“They had the video and the FBI and Rangers had already interviewed her and confirmed with her that she kicked the rock out,” said Flanary. “It doesn’t make sense.”

Jesse Rizo, the uncle of Jackie Cazares who was among the students killed at Robb, confronted McCraw at the hearing.

“Your officers either lied to you or you painted a picture that was favorable to your department,” Rizo said to McCraw.

Marin has decided to take action in the wake of this tragedy and has filed suit against the manufacturer of the gun used in the Robb shooting. She is also considering other legal options.

It is expected that substantial additional information about the probe will be revealed once the criminal investigation is completed by the end of 2022.

Uvalde:365 is a continuing ABC News series reported from Uvalde and focused on the Texas community and how it forges on in the shadow of tragedy.