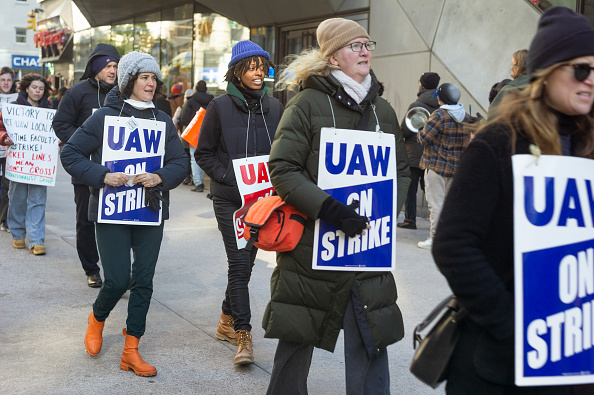 (NEW YORK) — Part-time faculty on strike at The New School university in New York City will stop receiving wages and premiums for health care benefits on Wednesday, three weeks into its strike.

The workers are paid on a monthly basis, so they will not be affected until the end of the month, but many of them are scared, Lee-Sean Huang, a member of the bargaining committee and part-time faculty member at The New School’s Parsons School of Design, told ABC News.

Part-time faculty on strike are asking the university for affordable and reliable health insurance; pay that accounts for out-of-class work and inflation; job security; and recourse against discrimination and harassment, according to Huang.

About 2,600 part-time faculty represented by the ACT-UAW Local 7902 worker’s union voted to go on strike on Nov. 16. But, not all of the faculty are teaching this semester so only about 1,500 of those faculty are actively on strike, according to Huang.

Part-time faculty’s contracts and pay “have not kept up” with high inflation, Huang said. Minimum rates for part-time faculty currently range from $71.31 to $127.85 per teaching hour based on the type of course they teach, according to the university’s website.

If the strike continues, workers would get strike pay from the union of about $400 a week.

The New School is not the only institution where workers have gone on strike demanding higher compensation. A worker strike across the University of California system’s 10 campuses has entered its fourth week as they demand higher wages, improved leave for parents and caregivers and childcare support.

Workers across the University of California system say their compensation does not line up with the cost of living. Academic researchers and postdocs at the University of California reached a tentative agreement with the system, while academic student employees and student researchers have not yet voted to ratify proposed agreements. Academic researchers and postdocs said they would continue the strike in solidarity.

Negotiations between the union and The New School had begun in June.

The university put what it said was its “last and final offer” on the table on Nov. 20, which it said included “a very fair package of wages, comparable or even superior to many other institutions that are comparable to us,” Tokumbo Shobowale, the executive vice president for Business and Operations at The New School, told ABC News.

Union workers overwhelmingly voted to reject the proposal, according to Huang.

The university has not received a written counterproposal from the union, Shobowale said.

Even though a lot of progress has been made, Shobowale said fundamental issues need to be resolved. Shobowale, who could not discuss details of the offer, said the union is making demands that the school cannot afford and asking for things that no other university offers. A mediator was brought in on Friday, which Shobowale said has helped the negotiations.

Shobowale said the university is working hard to get a deal done, but the union is not reacting with a sense of urgency.

He said that the union is sometimes coming to the table in a “largely performative manner,” with as many as 700 members having attended some bargaining sessions.

Huang pushed back against those claims and said the matter was urgent for union members, especially after the university said it would cut off pay. Union teams were up late Monday and Tuesday to give the university a counterproposal and availability for bargaining this week has depended largely on the federal mediators’ schedule, Huang said.

Huang also said the union submitted a counterproposal to the university’s proposal by the deadline and is waiting to hear back.

The union’s initial request would have added $1 billion in compensation over five years, but the school’s annual budget is only $460 million, the school said. This would have been unattainable over five years and the university wouldn’t have been able to continue existing as it is, according to Shobowale.

“We are continuing to do everything possible to reach an agreement, as quickly as possible, on a contract that is fair, equitable, and financially responsible. The union’s contract demands continue to reflect the union’s desire that the university spend money that the university simply does not have,” The New School told ABC News in a statement.

“Agreeing to the union’s demands will grow the university deficit and likely force the university to make drastic cuts to university offerings and substantially increase tuition,” The New School added.