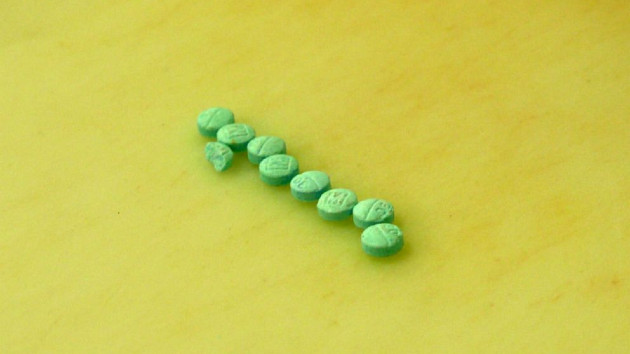 (NEW YORK) — As fentanyl overdoses and deaths have been on the rise across America, investigators have been setting their sights internationally to stop the flow.

Police and other experts say fentanyl and fentanyl-laced pills have been illegally imported from as far out as China and even smuggled through the U.S.-Mexico border.

“I’ve been doing this for almost 10 years now. And at one time, we would never find fentanyl. Now we’re catching it all the time -and it is coming in different forms,” Robert Meza, an import specialist with the U.S. Customs and Border Protection Agency, told ABC News.

Even with some recent crackdowns by governments, the fentanyl is still making its way into the country, into the hands of dealers and victims who have no idea they’re taking the potentially deadly substance, according to law enforcement.

Riverside County Sheriff Chad Bianco told ABC News that the majority of fentanyl that his office has confiscated is in the form of counterfeit pills that are delivered in the mail. The pills are designed to look like painkillers and sold to unsuspected victims, especially kids and teens, Bianco said.

“They think they’re experimenting with other drugs,” the sheriff told ABC News.

Some dealers who have been arrested for selling the tainted pills, however, said they had full knowledge of what was going out into the street, the authorities said. Investigators said the dealers add fentanyl to other illicit substances, such as heroin, to drive new addiction and create repeat clients.

Eric Falowski, who was sentenced to up to 25 years in prison in 2016 in Florida for intentionally adding fentanyl to counterfeit pills, told ABC News that he had his pills sent from a contact in China.

“She actually solicited the relationship directly to me and said she can provide fentanyl. That was my best supplier,” he told ABC News.

Under pressure from the U.S., Chinese suppliers have had difficulty sending the pills straight to America, experts said. However, those suppliers have come up with an alternative plan that includes more pit stops.

Investigators said Chinese drug suppliers send the ingredients to make fentanyl to cartels in Mexico. After creating the fentanyl, either in raw powder or pill form, the cartels would ship them across the border in trucks, according to investigators.

“What you’re seeing now is something that was never possible when fentanyl was coming from China. And that is a coverage of fentanyl all across this country,” Sam Quinones, the author of Dreamland and Least of Us, which chronicled the country’s opioid crisis, told ABC News.

Border patrol agents have stepped up their searches for the pills and other related fentanyl contraband.

Investigators said they’re not sure if they can stop the inflow of the tainted drugs, but reiterated that something needs to be done to stop the flow into the hands of unknowing victims.

“America is being poisoned with fentanyl, and we don’t even know it,” Bianco said.