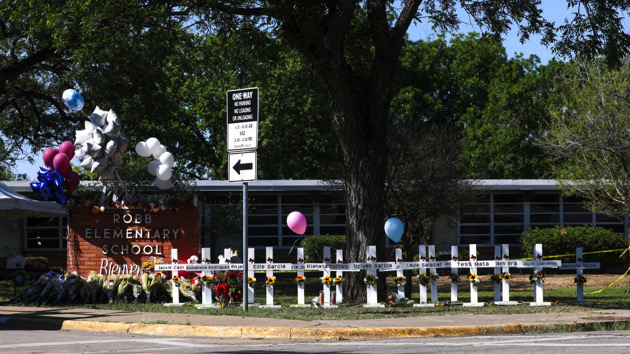 Two teachers were also among those killed at Robb Elementary School in Uvalde, according to authorities.

Prior to opening fire at the school, the suspect also allegedly shot his grandmother, officials said.

The alleged gunman — identified by authorities as 18-year-old Salvador Ramos, a student at Uvalde High School — is dead.

May 27, 12:36 pm
Officers did not breach classroom for 35 minutes while shooter was inside

Steven McCraw, director of Texas Department of Public Safety, admitted it was the “wrong decision” for officers not to go into the classroom where the suspect was for 35 minutes. Children were inside the classroom with him, making 911 calls, McCraw said in a press conference Friday.

The incident commander believed he was dealing with was a barricaded subject inside the school and the children were not at risk, he said.

“Of course it wasn’t the right decision,” McCraw said. “It was the wrong decision.”

May 27, 11:23 am
US Marshals say they never arrested or handcuffed anyone outside school

The U.S. Marshals said they never placed anyone in handcuffs, but they say they “maintained order and peace in the midst of the grief-stricken community that was gathering around the school,” in a statement posted on Twitter.

U.S. Marshals arrived on scene from Del Rio, Texas, at 12:10 p.m., and the first deputy U.S. Marshal went into the school to assist BORTAC, the elite tactical CBP team that ultimately shot the alleged shooter, the statement said.

They came from 70 miles away and got the first call around 11:30 a.m., according to the statement.

“Additional Deputy U.S. Marshals were asked to expand and secure the official law enforcement perimeter around the school,” the statement said. “Our hearts are heavy with sorrow and sadness at this horrific crime. We send our condolences to all the victims and families affected by this tragedy.”

Angeli Rose Gomez, a mother waiting outside for her children, told the Wall Street Journal she was one of numerous parents urging police and law enforcement officers to go into the school sooner, first politely and then more urgently. She said U.S. Marshals put her in handcuffs, and told her she was being arrested for intervening in an active investigation.

Angel Garza, the stepfather of one of the children killed in the shooting, ran to try to reach and help his child, and was restrained and handcuffed by a local police officer, Desirae Garza, the girl’s aunt, recounted to the New York Times.

There was blood in the hallway and children were covered in it, one of the students who survived the mass shooting at Robb Elementary School in Uvalde, Texas, told ABC News.

Salinas was a student in Irma Garcia’s fourth-grade class. They were scheduled to graduate Thursday, but the ceremony was canceled because Garcia, another teacher and 19 third- and fourth-grade students were killed in Tuesday’s massacre.

Salinas said his aunt dropped him off for school on Tuesday morning.

“It was a normal day until my teacher said we’re on severe lockdown,” he told ABC News, “and then there was shooting in the windows.”

Salinas said the gunman came into his classroom, closed the door and told them, “You’re all going to die,” before opening fire.

“He shot the teacher and then he shot the kids,” Salinas said, recalling the cries and yells of students around him.

May 26, 9:57 pm
Accused shooter’s mother at one point worked at same establishment of gun purchase: Sources

The establishment is half gun retailer, half restaurant; Reyes’ employment was with the restaurant portion, sources say.

It is unclear if she had any role in her son’s purchase of the firearms. The owner of Oasis declined to comment to ABC News and added he would only speak with law enforcement at this time. Reyes has not responded to ABC News’ request for comment.

May 26, 6:49 pm
Law enforcement examining if lockdown was audible to students, staff: Sources

The response by school officials and law enforcement is becoming a key focus in the ongoing investigation into the Uvalde school shooting, law enforcement sources told ABC News Thursday.

It is unclear whether any students and teachers heard an official call for a lockdown once the gunman entered the building, the sources said.

Additionally, investigators are looking into whether officers on site could have made other attempts to enter the school to end the gunman’s rampage faster, the sources said. Responding police were met with gunfire and called for tactical teams with proper equipment to enter the classroom and neutralize the gunman, according to the sources.

A student who was in the classroom next door to the one the gunman entered recounted to ABC News what she did next.

Gemma Lopez, 10, said she heard five to six gunshots and commotion outside her classroom at Robb Elementary School before a bullet whizzed by her arm and into the wall. She recalled seeing a puff of smoke, which is when she knew they were all in danger.

She said she turned off the lights and then ducked under the tables — what she learned to do in the active shooter training she has undergone since kindergarten. There were no locks inside and they did not have a key in the classroom to lock the door from the inside, she said.

Authorities yelled at the gunman to put down his weapon, to which he reportedly shouted in response, “Leave me alone please,” in Spanish, Gemma recalled.

Gemma said her best friend, Amerie Jo Garza, was one of the 19 children killed in the massacre.