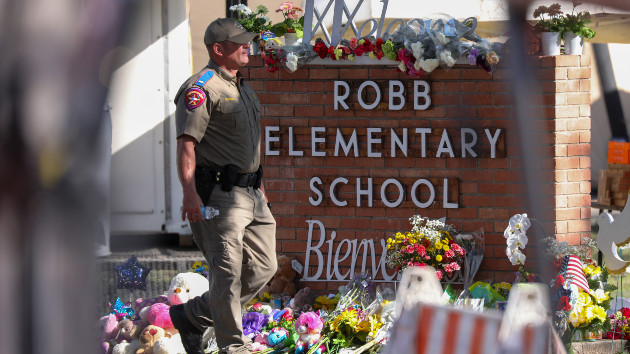 Two teachers were also among those killed at Robb Elementary School in Uvalde, according to authorities.

Prior to opening fire at the school, the suspect also allegedly shot his grandmother, officials said.

The alleged gunman — identified by authorities as 18-year-old Salvador Ramos, a student at Uvalde High School — is dead.

Eva Dulia Orta, the mother of 10-year-old Rojelio Torres, a fourth grader who died in the Tuesday shooting at Robb Elementary, told ABC News that she is trying to stay strong for the rest of her children, but “I lost a piece of my heart,” she said.

The mother of four told ABC News she went to pick up two of her children at the school, but only came home with one.

This has not only devastated her entire family, but the community, she said, speaking with her twin sister.

“We are praying for everyone, all the children and all the families,” she said.

May 26, 1:49 pm
Witness recounts police response to Uvalde shooting: ‘Why aren’t they going in?’

Bob Estrada, who lives across the street from Robb Elementary School, recounted to ABC News the moments he went out on his porch after hearing gunshots, saying he witnessed the police response to the shooting unfold.

Estrada, whose grandson is a second grader at the school who survived the shooting, said he saw “quite a few” officers outside the school immediately, and then police cars started driving up — but “some of them just stood there.”

“Why aren’t they going in?” Estrada told ABC News he wondered at the time.

Estrada said it was not long before parents began to arrive. “They were hysterical,” he said.

“There were parents out there, and they were kinda motioning like they wanted to come in,” Estrada said. “They were motioning like, ‘What are you doing? Go in!"”

Estrada said he did see some officers go in immediately.

Asked if he saw reinforcements heading into the school, Estrada said no. But, he did not know what sort of presence may have already been inside.

May 26, 1:24 pm
Young girl who gunman allegedly texted before shooting speaks out

The young girl who allegedly received messages from the Texas gunman moments before his rampage told ABC News she has been asking herself “what if I could change the outcome” since seeing the news that her friend killed 19 students and two teachers on Tuesday.

“Ever since May 24th I have been guilt tripping myself, what if I could change the outcome, what if I could change his mind to not do this. I was too dumb to realize why he bought two Rifles on his birthday May 16th and ordered a package full with ammunitions not knowing what he was going to do with it,” the 15-year-old girl, who asked to be referred to as “Cece,” told ABC News.

The messages are part of an ongoing investigation into the shooter, law enforcement sources told ABC News.

Cece, who lives in Germany, said she met the accused gunman on the social media app Yubo where they would “join each others live” streams. The pair met on the app on May 9 before exchanging cellphone numbers, Cece said.

The messages reviewed by ABC News and other outlets appear to show that Cece did not respond to the gunman’s threats until after news of the shooting broke and nearly all the texts are solely from the suspect. It is unclear if the messages were at all edited.

May 26, 10:01 am
Texas school district cancels school after receiving ‘credible threat of violence’

The Donna, Texas, Independent School District has canceled classes after it received a “credible threat of violence,” school officials said in a letter posted on Facebook. Donna is about 4 1/2 hours from Uvalde.

The threat is currently under investigation and classes will resume on Tuesday, the district said.

“In light of the recent events and in an abundance of caution we will be canceling school district-wide and staff will be working from home,” the letter said. “The safety and security of our students & staff is our first priority.”

May 26, 7:32 am
Bodies of nine victims released to funeral homes, with more expected today

More — possibly all — of the remaining bodies are expected to be released at some point on Thursday, according to Diaz. It will mark the beginning of the funeral arrangement process for many grieving families in the wake of the second-deadliest school shooting in U.S. history. There are two funeral homes in Uvalde, and both are offering free services to families of the victims.

“My job is to try and get them back home as quickly as possible,” Diaz told CNN in an interview early Thursday.

In a county of less than 50,000 people, there is no medical examiner and the justice of the peace in the state of Texas assumes the responsibility of the county coroner, according to Diaz.

Diaz described his job of going in and assessing the bodies of the dead at Robb Elementary School on Tuesday in the immediate aftermath of the mass shooting. He said Irma Garcia, one of the teachers who were killed, was a former high school classmate of his.