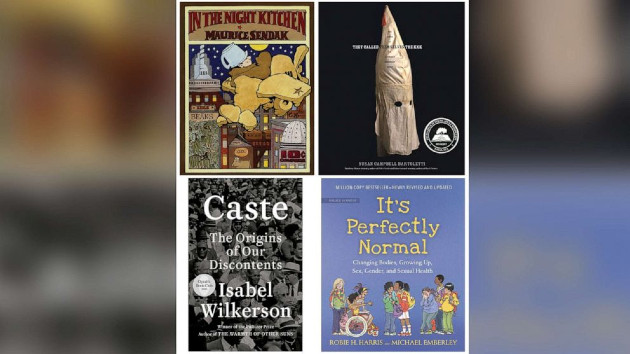 (NEW YORK) — A group of residents in Llano County, Texas, is suing county officials for removing books from public libraries because officials “disagree with the ideas within them.”

The residents say the county is violating their first amendment rights by removing award-winning books from shelves due to their content and terminating “access to over 17,000 digital books” from the local library system.

“Public libraries are not places of government indoctrination,” the lawsuit filed Monday reads.

It continued, “They are not places where the people in power can dictate what their citizens are permitted to read about and learn. When government actors target public library books because they disagree with and intend to suppress the ideas contained within them, it jeopardizes the freedoms of everyone.”

Several of the books listed in the lawsuit that have been removed from libraries include adult works about oppression and racism like Caste: The Origins of Our Discontents, by journalist Isabel Wilkerson, and They Called Themselves the K.K.K.: The Birth of an American Terrorist Group by Susan Campbell Bartoletti.

The lawsuit also listed some of the children’s books that have been removed: Maurice Sendak’s In the Night Kitchen is about a boy’s dream of making a cake, and Robie H. Harris’ It’s Perfectly Normal: Changing Bodies, Growing Up, Sex, and Sexual Health is a sex education book about the biology of the human body.

“Though Plaintiffs differ in their ages, professions, and individual religious and political beliefs, they are fiercely united in their love for reading public library books and in their belief that the government cannot dictate which books they can and cannot read,” the lawsuit read.

The complaint states that the library system’s policy claims that “in no case should any book be excluded because of race or nationality or the political or religious views of the writer.”

The local fight over book bans has been ongoing.

In December 2021, the Llano County Library shut down for several days to review the children’s books in the library. The move followed a directive from Matt Krause, the chairman of the Texas House Committee on General Investigating.

He asked districts to provide insight into library material that discussed human sexuality “or contain[ed] material that might make students feel discomfort, guilt, anguish, or any other form of psychological distress because of their race or sex or convey that a student, by virtue of their race or sex, is inherently racist, sexist, or oppressive, whether consciously or unconsciously.”

Shortly after, in January 2022, the court voted to dissolve the existing library board and appointed a new board of residents advocating for the removal of the aforementioned books, according to the lawsuit.

Several plaintiffs wanted to join the new board but say they were refused due to their “public stances against ongoing censorship efforts in the County.”

One plaintiff, according to the lawsuit, “holds a master’s degree in Library and Information Science, previously managed the rare books collection at the University of Texas Medical Branch in Galveston, and formerly served on a library board in Wichita Falls.” He says he was refused a position on the new board.

Other plaintiffs say they were fired from the previous library board or would not be considered for a position on the new board.

The lawsuit also claims that one librarian was fired after refusing to remove books from the shelf.

Llano County declined to comment to ABC News about the lawsuit.

In a past statement, County Judge Ron Cunningham told The Washington Post that the county was “cognizant of the concerns of our citizens pertaining to our library system.”

He claimed that “a portion of the public and media have chosen to propagate disinformation that Llano County (and other rural communities) are operating with political or phobic motivations,” and said that such was not the case.

Llano County is just one of many nationwide fired up about the restriction of subjects in public libraries and schools.

Republican-backed efforts across the country, including what critics call the “Don’t Say Gay” law in Florida or the anti-race education legislation, aim to limit speech and/or content on race, gender and sexual orientation.

The American Library Association’s Office for Intellectual Freedom (OIF) has tracked a record-breaking number of book challenges, or attempts to ban or remove books, in 2021.

“In 2021, libraries found themselves at the center of attacks orchestrated by conservative parent groups and right-wing media that targeted books about race, gender, and LGBTQIA+ issues for removal from public and school library shelves and, in some cases, included threats of book burning,” the organization stated in its “State of America’s Libraries” study.