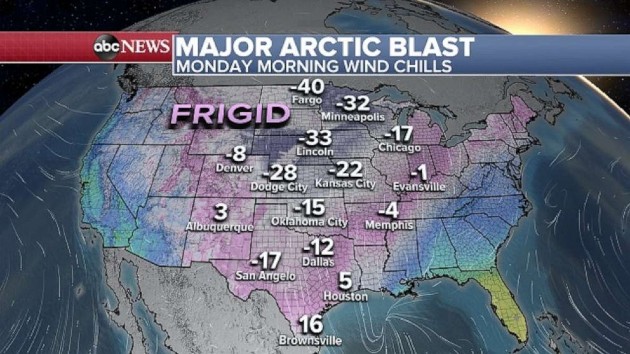 The declaration orders federal assistance to supplement state and local storm response efforts, according to a statement from the White House.

“The President’s action authorizes the Department of Homeland Security, Federal Emergency Management Agency (FEMA), to coordinate all disaster relief efforts which have the purpose of alleviating the hardship and suffering caused by the emergency on the local population, and to provide appropriate assistance for required emergency measures, authorized under Title V of the Stafford Act, to save lives and to protect property and public health and safety, and to lessen or avert the threat of a catastrophe in all 254 Texas counties,” the statement from the White House said.

As of 5:30 a.m. Monday, there are 1,547,567 customers without power in Texas due to the winter storm and state officials have warned that number could get higher.

ERCOT, the energy provider in Texas, entered its highest alert level overnight and has begun rolling blackouts to conserve power during this harsh winter storm.

“This is typically done through rotating outages, which are controlled, temporary interruptions of electric service. This type of demand reduction is only used as a last resort to preserve the reliability of the electric system as a whole,” ERCOT said in a statement obtained by ABC News.

Texas told residents they should conserve power due to frozen turbines and equipment. As of 6 p.m. Sunday, a little less than half of all its installments were frozen or unable to operate due to the extreme cold, according to ABC Dallas affiliate WFAA-TV.

“There’s certainly a possibility we could have to do rotating outages,” Dan Woodfin, senior director of system operations at the Electric Reliability Council of Texas, the agency that oversees the state’s electric grid, told WFAA. “We believe we may have to tomorrow [Monday] and Tuesday. That is a little more likely.”

ERCOT set a new winter peak demand record Sunday, reaching 69,150 MW between 6 and 7 p.m., the council said in a statement. It said that number is more than 3,200 MW higher than the previous winter peak set in January 2018.

To help conserve energy ERCOT asked residents to close their blinds, unplug unused appliances, wait to do laundry for a few days, put on warmer clothes and put the heat at 68 degrees.

According to the National Weather Service, many parts of the state will experience “dangerously cold” temperatures Sunday night and into Monday when there will be “widespread wind chills” of -10 to -20 degrees.

Harris County Judge Lina Hidalgo said the “window to prepare for this historic storm has closed as the time to hunker down is here,” during a press conference Sunday. Hidalgo approved a disaster proclamation for the county, which includes Houston.

She and Houston Mayor Sylvester Turner have urged people to stay home and off the roads.

“… it’s very, very important. Folks stay off the roads so that we don’t cause a disaster on top of a disaster,” officials said Sunday.

According to ABC station KTRK-TV in Houston, the coldest weather in 122 years is moving into the city.

In nearby Oklahoma, a state of emergency remains in effect for all 77 counties due to the storm. A statewide winter storm warning for heavy snow and dangerous wind chills remains in effect.

Oklahoma Highway Patrol reports it has responded to 56 non-injury collisions, 24 injury collisions and 116 motorist assists during the winter storm. There were more than 3,000 customers without power in the Sooner State as of Sunday night.