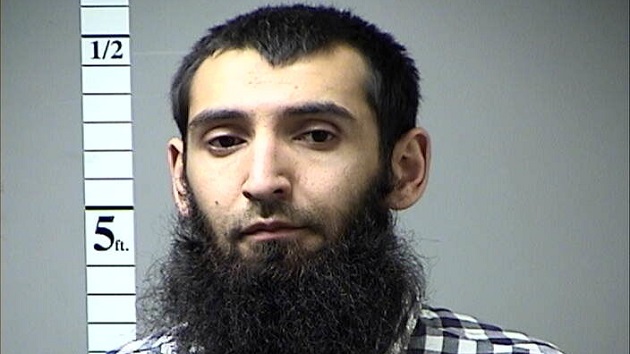 (NEW YORK) — The attack fits a pattern of deadly vehicle attacks throughout Europe over the past two years.
The first federal death penalty trial of the Biden administration opens Monday in New York City, where Sayfullo Saipov is charged with the 2017 killings of eight people when he allegedly plowed a rental truck into pedestrians and cyclists along the West Side Highway.

The truck attack, which was on Halloween, was the deadliest terror attack in New York since Sept. 11, 2001.

Saipov, a native of Uzbekistan who lived in Florida, Ohio and New Jersey following his arrival in the United States, has pleaded not guilty to charges that include murder in the aid of racketeering.

He was allegedly inspired to commit the killings by ISIS videos he viewed, prosecutors said. The rental truck used in the Oct. 31, 2017, attack was decorated with an ISIS flag.

The suspect allegedly drove the truck on a bike lane and pedestrian walkway in lower Manhattan, near Stuyvesant High School. When the truck collided with a school bus, the driver exited the vehicle holding two objects, a paintball gun and pellet gun, prosecutors said.

“Moments after Saipov got out of the truck, he yelled, in substance and in part, ‘Allah Akbar,"” according to charging documents filed in the case.

MORE: Feds interviewed accused NYC truck attacker in 2015 about possible terror ties
Prosecutors alleged Saipov rented the pickup nine days before the attack “so he could practice making turns with the truck in advance of his attack,” prosecutors said.

He chose Halloween to commit the attack, anticipating there would be more civilians on the streets that day, prosecutors alleged.

The attack required “substantial planning and premeditation,” prosecutors said, describing how Saipov carried it out as “heinous, cruel and depraved.”

If Saipov is convicted there would be a penalty phase of the case in which the jury would decide whether he deserves the death penalty or life in prison.

It has been a decade since the Southern District of New York last prosecuted a death penalty case. Its last capital murder case was against Khalid Barnes, who was convicted of murdering two drug suppliers but was ultimately sentenced to life in prison in September 2009.

The last time the death penalty was carried out in a New York federal case was in 1953 when Julius and Ethel Rosenberg, a married couple, was executed after being convicted of conspiracy to commit espionage for the Soviet Union during the Cold War two years before.