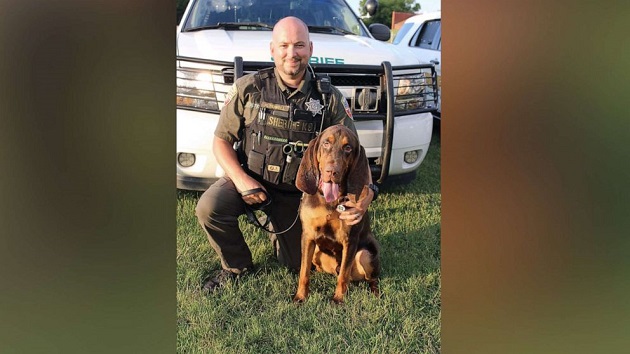 (MURFREESBORO, Tenn.) — An intense around-the-clock search for a missing 6-year-old Tennessee girl involved multiple law enforcement agencies, drones and airplanes equipped with thermal imaging, but ended when a deputy dog sniffed out the child allegedly being hidden in a rural shed by her father, authorities said.

Fred, a bloodhound member of the Rutherford County Sheriff’s Office, is being showered with praise for rescuing the girl authorities allege was kidnapped by her dad.

“He licked her face and she gave him a big hug,” K-9 Deputy Richard Tidwell of the Rutherford County Sheriff’s Office said of the scene that unfolded Friday in Pea Ridge, Tennessee, about 100 miles northeast of Nashville near the Tennessee-Kentucky border.

The DeKalb County Sheriff’s Office launched a search for the girl, Kinzleigh Reeder, on June 21 after the Tennessee Department of Children’s Services, which had been granted custody of the child a few days earlier, reported her missing when they could not locate her, officials said.

DeKalb County Sheriff Patrick Rey said in a statement that the girl was last seen on May 26 by a relative who was given temporary custody of her after the child’s 34-year-old father, Nicholas Reeder, was arrested in March on charges of child abuse and neglect.

The girl went missing soon after her father was released from jail and allowed by the Department of Children’s Services to stay at the home where his daughter was living, Rey said.

He said the search led investigators to the Pea Ridge area, where Nicholas Reeder owns property.

The big break in the search came on Friday evening after a drone being operated by Rutherford County Fire & Rescue personnel found evidence that led them to suspect the father and daughter were hiding somewhere on the Pea Ridge property Nicholas Reeder owns.

That’s when authorities called in Fred the bloodhound.

“The bloodhound was able to locate a scent that led to an outbuilding located on the property,” Rey said, adding that the dog had earlier been given an item belonging to the father to smell.

Tidwell added that Fred sniffed the door and doorknob of the shed “then sat down indicating he found the father.”

Rutherford County Sheriff’s Sgt. James Holloway said the shed’s door was barricaded and that pieces of metal were covering the windows.

“We made entry into the building and discovered the suspect and child in the back of the shed behind blankets that were hanging from a makeshift clothesline,” Holloway said in a statement.

Rey added that there was little ventilation in the small shed and barely any food or water for the child. He said it appeared the father and daughter had been using a bucket to urinate and defecate in.

The rescued girl was turned over to the custody of the Department of Children’s Services.

Nicholas Reeder was arrested on new charges of child abuse or neglect. He was also arrested on warrants for failure to appear at a previous court hearing and custodial interference.

He was jailed on $175,000 bond, officials said. It was unclear if Reeder has hired an attorney.

Tidwell said Fred’s good deed did not go unrewarded. He said Fred was given his favorite chicken dinner to feast on as well as an extra treat of pizza crusts.

“I praised him and loved on him,” Tidwell said. “I pulled the chicken reward out of my pocket. He ate the chicken and wanted to meet other people as if to say, ‘Look what I’ve done."”