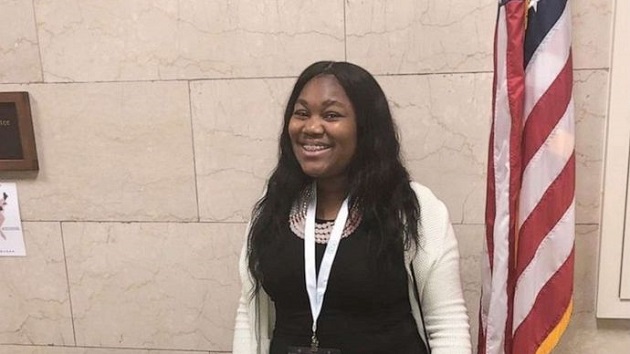 (NEW YORK) — Once someone who said she felt she had no options, a teenager now has been accepted to more than 50 colleges for the upcoming academic year, according to her high school.

Destiny Jackson, 18, ran away from an abusive home in Philadelphia when she was just 13 years old, she said.

“It was getting really out of control,” she said about her circumstances at the time.

Jackson told “Good Morning America” she took it upon herself to leave home. She said she experienced homelessness, couch-surfed and bounced around foster care and group homes.

“It was very rocky in the beginning,” she said.

Jackson said she also had to learn how to manage her health early on. She says she was diagnosed with Type 1 diabetes at 3 years old, but said the lack of stability at home meant she had to assume the responsibility that would otherwise be reserved for a legal guardian.

“There wasn’t one consistent person responsible for my diabetes except me because one day I could be here, the next day I could be there,” Jackson said. “The only constant person is always me so I thought it was my responsibility — my duty — to be able to have control over my diabetes.”

Jackson said she would often attend her diabetic appointments alone, but learned how to manage the disease through the help of her doctors and workers at the homeless shelter.

Her health condition and age made it difficult finding foster families willing to take her in, she said.

“I did struggle with finding homes because a lot of people do not want someone who’s Type 1 diabetic,” she said. “But then I was a teenager as well. It wasn’t something that was good.”

Reports by the U.S. Health and Human Services Department found that younger children have a higher chance of adoption than older kids. In the 2019 fiscal year, the average age of adoption was 8.7 years, according to HHS data.

A determination to beat the odds

Although finding a willing foster family proved difficult, according to Jackson, she now has her pick of colleges to choose from.

And the odds of even going to college are against Jackson’s favor. The National Foster Youth Institute found that only about 50% of kids in foster care finish high school, and less than 3% graduate from a 4-year college.

“I did not want to allow anything to get the best of me,” she said of her motivation. “I always wanted to go to college. I always knew that I wanted to do something with my life. No matter what happened, I needed to keep my eye on the prize.”

Through various college fairs and online applications, Jackson applied to numerous colleges. As long as she got into one, she said, she would be all right.

But when the decisions came rolling in, they were all acceptances. All in all, Jackson was accepted into 56 colleges at the time of this report, including the University of Pennsylvania, the University of California Los Angeles, and Howard University.

Her top choice was Spelman College in Atlanta, to which she recently committed.

“[Spelman] has an illustrious history of women in leadership — dedicated, strong-minded, and educated women — and I believe that is me,” Jackson said, explaining why she chose the historically Black women’s college.

She said her plans are to double major in political science on a pre-law track and communication and media studies.

“There’s always men who are within these leadership positions. So with me seeing Kamala Harris, not only being the vice president of the United States, but also her being a Black woman, I think that that is beyond an accomplishment,” Jackson said. “That gives me a lot of confidence to know that okay, if she can do it, why can’t I?”

While at Spelman, Jackson said she also plans to pursue acting, as the arts were one of her main coping mechanisms. She said that she “loves to sing and act” and wants to have her own radio show before she goes on to becoming president of the United States. Jackson has interned with Philadelphia’s city council.

“There have been so many times where people have told me that I was incapable of doing something, whether that meant because of the fact that I was homeless, and I was in foster care or even just me being a Type 1 diabetic,” Jackson said. “But I knew that I was capable of doing whatever I put my mind to no matter what anybody else said.”

Her advice to others: “I learned within life that no matter what you put your mind to, you cannot allow other people to make decisions for you. You are the author of your own story, you create your own narrative. If you want to do something, you can make it happen.”