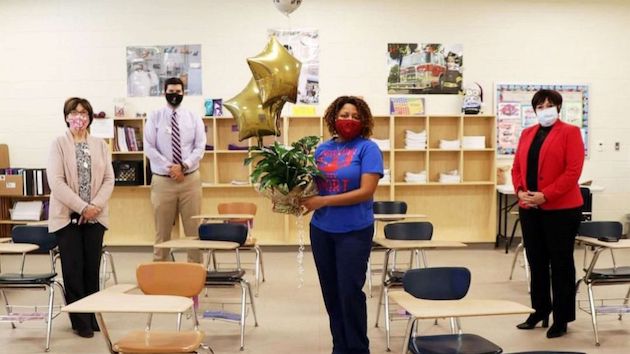 (NEW YORK) — Pamela Wilson, a second grade teacher in Washington state, has been an educator for 18 years.

This year, amid the ongoing coronavirus pandemic that has disrupted three consecutive school years, Wilson said she is facing a level of burnout she never has before.

“I sit in my car and don’t want to go in,” Wilson told “Good Morning America.” “It’s not because of my students, it’s because of the broken system around them that’s been magnified by the pandemic.”

“The system is broken and we see that it’s broken, but everyone tries to go on like it’s normal,” she said.

Wilson, a public school teacher, said her school has a shortage of full-time teachers as well as a shortage of substitute teachers, which means teachers like herself are burdened with no time off and no time for planning, leading to 12-hour workdays.

“This is my passion and I love my job, but I’m struggling this year, wondering, if this is the new normal, can I do this job anymore?” said Wilson. “I keep waiting for it to get better and it gets worse.”

Charity Turpeau, the 2021-22 middle school teacher of the year in her Louisiana school district, said she too has never seen burnout among teachers at this level in her 16 years of teaching.

“I absolutely love what I do, but lately with the workload, demands from the state, pandemic restrictions, and lack of pay I feel as if I am doing less of what I love, which is teaching,” she said. “The paycheck does not match the amount of workload we are given and the overtime we work to try and complete it all.”

Schools across the country have faced a shortage of teachers in recent years, mainly due to low pay and stressful working conditions. The burnout among teachers this year though, amid the ongoing pandemic, has led to a shortage that teachers like Wilson describe as “unbearable to the system.”

Brittni, who asked that her last name not be used, quit her job as a kindergarten teacher in Tulsa, Oklahoma, this September, a few weeks into the school year.

“I was very overwhelmed with lots of responsibility and little support and long hours,” she said. “I don’t think people understand how hard it is to be a teacher,” she said. “We all love kids, that’s why we do it, but we have to have some kind of respect and some kind of support to keep it going.”

The October jobs report showed a decline in employment in public education, according to data from the Bureau of Labor Statistics, while the Department of Education reports a teacher shortage in every state.

The state of Florida opened the school year with a shortage of 5,000 teachers, a number that by October had slightly increased, according to a spokesperson for the Florida Education Association.

And school districts across the country are reporting a triple whammy of not only a shortage of teachers but also substitutes and school support staff, like bus drivers.

“It’s just not teachers, but staff in general — custodial staff, support staff, administrative staff,” said Dr. Mark P. Holtzman, superintendent of McKeesport Area School District in Pennsylvania, which educates more than 3,000 students. “It’s been a gradual problem and obviously, the pandemic has not impacted it positively.”

Holtzman said his district, which employs around 300 teachers, has been hit hard by veteran teachers choosing to retire and a lack of new teachers entering the field.

“Now it has kind of hit the wall where we’re struggling to fill slots with quality candidates, and substitute teachers don’t exist, so trying to fill classrooms is almost impossible,” he said.

With a lack of substitute teachers to fill the holes, full-time teachers are being asked to do the impossible, teachers and advocates say.

“The burden of the workload has doubled and tripled,” said Katherine Bishop, a teacher for 23 years and current president of the Oklahoma Education Association. “Teachers don’t even have their preparation time anymore. They’re covering classes or taking double the students, and we’re still in a pandemic, teachers, kids, and support professionals are still getting sick.”

Added Turpeau, “Teachers are getting overwhelmed and they’re leaving, and teachers that are staying on are taking on additional challenges. They add stuff on us, and when they add one thing, they take away 15 minutes of our time.”

No time off and no help in sight

As the burnout and shortage among teachers intensifies, advocates say educators are among the thousands of Americans who could benefit from a federal intervention that would all allow guaranteed paid time off.

However, it remains unclear whether Congress will pass paid family leave, a measure that was promised by President Joe Biden on the 2020 campaign trail.

House Speaker Nancy Pelosi announced Wednesday that she would include four weeks of paid family leave and medical leave into the $1.85 trillion social spending bill. The decision came just days after the measure was put on the chopping block when top Democrats failed to come to a compromise with Sen. Joe Manchin (D-W.Va.).

While Manchin has not explicitly said he will oppose a plan with paid family leave included, he has expressed concerns about the cost of the program and disapproved of its placement in the reconciliation bill.

“I just think it’s the wrong place to put it because it is a social expansion,” Manchin told reporters on Nov. 3, adding it would mean “getting in more debt and basically putting more programs that we can’t pay for that we are having problems with now.”

Manchin’s concerns come as education advocates in his own home state of West Virginia urge him to pass federal paid leave.

“The sooner that we can tackle this and address this issue, the better,” said Dale Lee, president of the West Virginia Educators Association. “The conditions are only going to get worse with the mental stress that has been put on educators this year. More and more people are either going to retire or leave the profession altogether. We can’t fill the positions that we have right now. Almost every county in West Virginia has a teacher shortage, and every county has a substitute shortage because you don’t have enough subs on any given day to fill in for the educators that are out,” Lee added.

Teneshia Moore, a Southfield, Michigan, middle school science teacher, told ABC News that she would like Manchin and other lawmakers to consider how federal paid leave would dramatically impact the lives of educators like herself, who continued to have little recourse during the demanding times of the pandemic.

With 12 days of annual paid leave, Moore said she relied on her rollover sick days after not taking time off from previous years so she could care for her family members who were infected with COVID-19.

Erin Castillo, a high school teacher in Fremont, California, said her school started the year short 40 teachers, which has caused her workload to nearly triple.

She gets two paid personal days off per year, along with 10 sick days, but no paid maternity leave.

“If I need maternity leave, then that’s coming out of my sick leave, so often teachers are all saving those up for maternity leave so they can get paid, which means they’re left with two paid days off,” she said. “That’s really hard for teachers to get through.”

Describing the workload she and other teachers are facing this year, Castillo said, “I think it’s beyond the typical teacher burnout that people talk about. I describe it as trying to come up for air and there’s no chance to catch your breath because more and more just keeps coming at you.”

Education experts including Randi Weingarten, president of the American Federation of Teachers, say they worry what will happen to the education system long-term if teachers are not supported now.

A study conducted by the AFT with the Rand Corp. earlier this year found one in four teachers were considering leaving their job by the end of the school year. Teachers were also more likely to report experiencing frequent job-related stress and symptoms of depression than the general population, according to the study.

“What COVID has done is exacerbated all the inequalities and the inequities [of education], but teachers will always attempt to do what’s asked of them, which covers up some of the inequalities and some of the inequities,” said Weingarten. “We need to give them the conditions in which they can teach and kids can learn if we’re serious about having kids not only survive past COVID, but get their mojo back and thrive.”

Kim Anderson, executive director of the National Education Association, says the solution needs to start with better pay for teachers and go beyond that to offer better working conditions and more autonomy and respect for teachers.

“Delivering a world-class public education to every single student in America requires more than short-term Band-Aids,” she said. “It requires a unified, non-politicized, authentic attempt to address the reinforcement of and transformation of one of the most important institutions in our country, and that is our public education system.”

Anderson pointed to a survey of NEA members conducted in June, before the start of this school year, that found nearly one in three educators said the pandemic was likely to make them leave the profession earlier than expected.

“We need mentoring and professional learning communities that are led by educators, for all educators. We need strategic partnerships with teacher preparation programs for new educators, as well,” she said. “We need teacher residency programs within school districts to build a long-term pipeline.”

Nieka Richard, a California teacher who went viral when she posted on TikTok about quitting her role, said she wants people to know how important teachers are and warns what may happen if teachers aren’t supported.

“If teachers are stretched really thin, then the education cannot be as robust as it should be,” said Richard. “And we as a country are going toward even more detrimental times because people are not properly educated and it starts in the classroom. It starts with the teachers.”