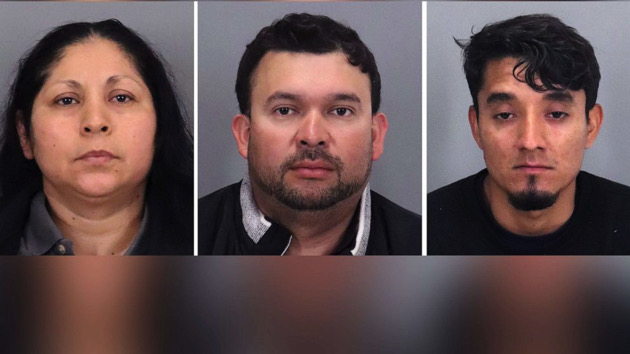 (SAN JOSE, Calif.) — A 3-month-old baby boy was found safe and in good condition Tuesday, one day after he was taken from his Northern California home in what police believe was a premeditated kidnapping.

The three suspects were identified by police on Wednesday as: Jose Roman Portillo, 28, Yesenia Guadalupe Ramirez, 43, and Baldomeo Sandoval, 37, all of San Jose.

The 3-month-old’s kidnapping was reported around 1 p.m. Monday by his grandmother, who was watching the baby while the mother was at work, San Jose Police Sgt. Christian Camarillo said.

The grandmother said she came home, took the baby inside the apartment and went back to the car to unload groceries, Camarillo said.

In that “short amount of time,” a man — later identified as Portillo — went into the apartment and took the little boy, Camarillo said.

Camarillo said the suspect brought a baby carrier with him to the home.

“We believe this was planned. It’s not some random act,” he said.

Police claim one of the suspects, Yesenia Guadalupe Ramirez, took the baby and grandmother to run errands.