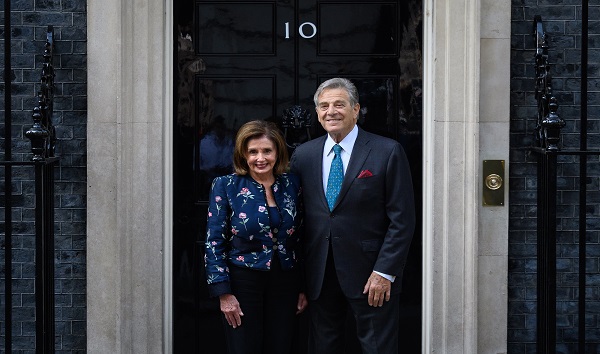 (NEW YORK) — The suspect accused of attacking Paul Pelosi told authorities he wanted to break Nancy Pelosi’s kneecaps to show members of Congress that there are “consequences to actions,” according to a criminal complaint filed in federal court Monday.

The new revelation came Monday as the Department of Justice filed federal charges of assault and attempted kidnapping against the man suspected of attacking Paul Pelosi, the 82-year-old husband of House Speaker Nancy Pelosi, last week.

David DePape, 42, is accused of attacking Paul Pelosi with a hammer in the couple’s San Francisco home just before 2:30 a.m. Friday, according to San Francisco police.

While San Francisco prosecutors have yet to announce charges against DePape, federal charges were always a possibility due to early evidence suggesting the suspect appeared to be motivated to allegedly break into the home, at least in part, to reach the speaker, sources told ABC News.

DePape is expected to be charged locally with attempted murder, assault with a deadly weapon, burglary and elderly abuse, authorities said following the attack.

Paul Pelosi and DePape each had one hand on a hammer when officers from the San Francisco Police Department arrived before DePape was allegedly able to wrestle the hammer away and begin “violently” attacking Paul Pelosi with it, Scott said.

Officers then tackled DePape and disarmed him, Scott said.

Paul Pelosi called 911 after DePape entered the home, allowing the dispatcher to hear what was happening during the altercation with DePape, police said. Paul Pelosi later told police that he had been asleep when DePape, whom he had never seen before, entered his bedroom, according to the complaint.

DePape allegedly later told officers “that he was going to hold Nancy hostage and talk to her” and that he wanted to use the House speaker to lure another unnamed individual, the affidavit states.

The suspect also allegedly told investigators that he intended to break Nancy Pelosi’s kneecaps if she didn’t tell him the “truth” about “lies told by the Democratic Party” and said she would have to be wheeled into Congress, therefore showing other members of Congress that there are “consequences to actions,” according to the criminal complaint.

Paul Pelosi was struck at least twice with the hammer, sources told ABC News. He underwent successful surgery on Friday to repair a skull fracture and serious injuries to his right arm and hands, the speaker’s spokesperson, Drew Hammill, said in a statement. Although his injuries are significant, he is expected to make a full recovery, Hammill said.

DePape allegedly shouted “Where’s Nancy?” repeatedly after entering the home through a sliding glass door and moving about the house, law enforcement officers familiar with the investigation told ABC News. The speaker was in Washington, D.C., at the time, according to Capitol Police.

The suspect was carrying a bag that contained duct tape and zip ties, two law enforcement officials briefed on the probe told ABC News on Sunday.

DePape was hospitalized with injuries following the attack. While police are still investigating the motive, the Institute for Strategic Dialogue, a think tank dedicated to researching extremism and disinformation, said DePape “likely was motivated by a wide range of conspiratorial beliefs.”

“In the last two months, DePape has posted dozens of articles and videos to his blogs spreading conspiracies and hateful rhetoric related to COVID-19, women, Hillary Clinton, the Jewish community, federal law enforcement (e.g., FBI), government censorship, Russia’s invasion of Ukraine, the climate crisis, QAnon, the 2020 election, the transgender community, and ‘grooming’ in schools,” the ISD said in a statement, though no posts were found specifically mentioning Nancy Pelosi.

Among the number of social media posts being examined by investigators include some in which DePape allegedly espouses conspiracy theories about COVID-19 vaccines, 2020 false election theories, frustration with the Jan. 6 congressional hearings and anger over the conviction of former Minneapolis Police officer Derek Chauvin for the killing of George Floyd, law enforcement officials told ABC News.

DePape is expected to be arraigned Tuesday. It is unclear whether he has retained an attorney.