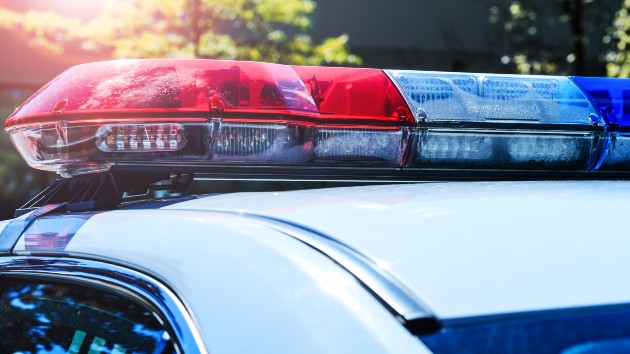 (NEW YORK) — A 23-year-old man is suspected of stealing a Kansas Highway Patrol vehicle and leading officers on a chase with speeds topping 100 mph — while handcuffed behind his back, officials said.

Investigators are trying to determine how the suspect, Joshua D. Swartwout of Naples, Florida, managed to get behind the wheel of the patrol car and drive it more than 30 miles without the use of his hands.

Trooper Tod Hileman, a spokesman for the Kansas Highway Patrol, told ABC News on Sunday that troopers who arrested Swartwout did not initially ask him how he operated the emergency vehicle.

“As a high-speed pursuit driving instructor for 20 years, I can only assume he was using his knees,” Hileman said.

The Houdini-like escape unfolded just after noon on Saturday as a Kansas Highway Patrol trooper was transporting Swartwout to a detention facility after he had been arrested on suspicion of auto theft following an earlier pursuit, according to a Highway Patrol statement.

Hileman said the patrol car was not equipped with a rear-seat cage or a partition.

“He was being transported in the front seat of the car,” Hileman said.

While on Highway 25 near Atwood in northwest Kansas, the trooper witnessed a serious motorcycle crash and pulled over to help, leaving Swartwout alone in the patrol car, Hileman said.

“We don’t normally do that, but this trooper saw this accident occur right in front of him and it was in a rural area,” Hileman said. “Being trained as a highway patrol trooper, it’s ingrained that you will help.”

While the trooper was assisting the crash victim, Swartwout, who was handcuffed behind his back, scooted over into the driver’s seat and drove off, according to the highway patrol statement.

Hileman said the chase topped 100 mph on a stretch he described as a narrow two-lane highway with ditches on both sides.

The chase continued onto Interstate 70 and headed west toward the Kansas-Colorado border. As the pursuit reached Edson, Kansas, roughly 30 miles from where it began, the stolen patrol car ran out of gas, according to the statement.

“The suspect, who was still handcuffed behind his back, fled on foot but was quickly apprehended,” a statement from the highway patrol reads.

Swartwout was examined by an emergency medical services crew that determined he was not injured. He was taken to the Sherman County Jail and booked without further incident, officials said.