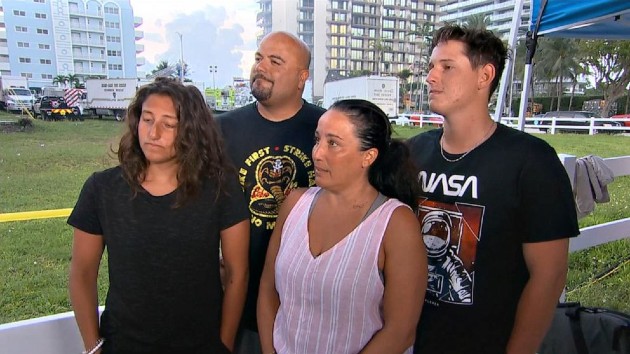 (SURFSIDE, Fla.) — Albert and Janette Aguero suddenly awoke early Thursday to what they said sounded like a “really loud clap of thunder.” Then their bedroom began to shake.

The New Jersey couple were vacationing with their two children in southern Florida, staying on the 11th floor of the oceanfront Champlain Towers South condominium in a unit owned by their parents.

“The chandeliers and the pendant lights [were] just swaying completely, and that was not normal. It was not a clap of thunder and it wasn’t a storm; it was something else,” Albert Aguero told ABC News’ T.J. Holmes in an interview Friday on Good Morning America.

“The whole bedroom was shaking so violently that, honestly, I was prepared for the whole building to come down,” Janette Aguero added.

But it wasn’t until they opened the door to the hallway that they realized what had actually happened.

“I looked to the left and the apartment to our left was half sheared off. I looked forward, which is where the elevator shaft is, and it was just a hole,” Albert Aguero recalled. “At that point, we knew it was a race against time because I didn’t know if the rest of the building was coming [down].”

The 12-story residential complex in the small, beachside town of Surfside, about 6 miles north of Miami Beach, partially collapsed before 1:30 a.m. local time on Thursday. Of the 136 condominium units, approximately 55 were destroyed along the northeast corridor, according to Miami-Dade Fire Rescue Assistant Chief Raide Jadallah.

The couple said their 22-year-old son and 14-year-old daughter were “mere feet away” from the part of the building that collapsed.

“It could have been a very different thing,” Janette Aguero said, her voice wavering with emotion. “I don’t think I’ve really processed what happened.”

A massive search and rescue operation has been underway since early Thursday, as crews carefully comb through the pancaked wreckage and remaining structure in hopes of finding survivors. So far, they have rescued 35 people who were trapped in the building and two others from beneath the rubble, according to Jadallah.

Jadallah told reporters that at least 11 people were medically assessed and treated on site, four of whom were then transported to local hospitals.

At least four people have been confirmed dead and 159 others remain unaccounted for, according to Miami-Dade County Mayor Daniella Levine Cava.

“I do want to emphasize that 102 people have been accounted for and that number is way up from the original count, and so we’re very, very grateful for the hard work of our firefighters on the scene,” Levine Cava told ABC News’ Cecelia Vega in an interview Friday on GMA.

“I’m very hopeful because we have the best team in the world. They’re working around the clock and they’re using every possible tool,” she added. “I know that they are hopeful, so we are hopeful as well.”

Teams of firefighters have been cutting through the rubble and placing sonar devices as part of the search efforts, a process that Jadallah said is “slow and methodical.” Responders have not heard any voices coming from the pile but have picked up “a possibility of a banging,” according to Jadallah.

The cause of the collapse remains unknown. The Miami-Dade Police Department is leading an investigation into the incident.

“Of course, it’s not ruled out,” she added. “Nothing’s ruled out. But, at this point, nothing to indicate that.”

A 2020 study conducted by Shimon Wdowinski, a professor at Florida International University’s Institute of Environment in Miami, found signs of land subsidence in from 1993 to 1999 in the area where the Champlain Towers South condominium is located. But subsidence, or the gradual sinking of land, likely would not on its own cause a building to collapse, according to Wdowinski, whose expertise is in space geodesy, natural hazards and sea level rise.

“When we measure subsidence or when we see movement of the buildings, it’s worth checking why it happens,” Wdowinski, who analyzed space-based radar data, said in a statement Thursday. “We cannot say what is the reason for that from the satellite images but we can say there was movement here.”

Areas where land is subsiding are more likely to experience more serious effects of sea level rise, according to the study, which was published in the international journal Ocean & Coastal Management.

Miami-Dade County officials are aware of the study and are “looking into” it, according to Levine Cava.

Surfside Mayor Charles Burkett, who called the collapse a “catastrophe,” told reporters that the condominium was built in the 1980s and was undergoing roof work at the time.

Surfside Commissioner Nelly Velasquez told ABC News that the building was up for its 40-year recertification.

Surfside Commissioner Charles Kesl told Miami ABC affiliate WPLG-TV that the building had been under scrutiny due to potential construction projects nearby.

“There have been engineers all over that building to validate that they would be OK for the 40-year recert,” Kesl said. “So how something of this magnitude which would be somehow structural could have been missed with that much scrutiny is shocking to me and a complete mystery.”

The Champlain Towers South Condo Association was preparing to start a new construction project to make updates and the condominium had been through extensive inspections, according to Kenneth Direktor, a lawyer for the association. Direktor said that he hadn’t been warned of any structural issues with the building or about the land it was built on. He said there was water damage to the complex, but that is common for oceanfront properties and wouldn’t have caused the collapse.

“Nothing like this has ever been seen, at least not in the 40 years I’ve been doing this,” Direktor told ABC News.

A Miami-Dade county official told ABC News that there’s real concern about the structural integrity of the remaining building, particularly from dangling wires and portions of concrete. Fires have flared up throughout the day, adding to the danger for the search and rescue teams, according to the official.

The official also told ABC News it’s been difficult to determine how many people were in the collapsed section of the building, partly due to the fact that there isn’t an on-scene management company that keeps track. The condominium is a mix of full-time residents, seasonal residents, renters and short-term visitors, so authorities have been relying largely on neighbors and word of mouth, according to the official.

A “substantial number” of the condominium’s residents are from overseas and “almost a third” of those reported missing are foreign citizens, according to Florida Sen. Marco Rubio.

“We are working with the Consulates of various countries in the Western Hemisphere to help secure travel visas for family members who need to travel to the U.S.,” Rubio wrote in a post on his official Twitter account on Thursday evening.

Argentina, Colombia, Paraguay, Uruguay and Venezuela have all reported nationals who have been affected by the building collapse in Surfside, with more than a dozen still missing.

Florida Gov. Ron DeSantis has declared a state of emergency in Miami-Dade County “to provide assistance for the families impacted by the Surfside tragedy,” according to the order issued Thursday evening.

U.S. President Joe Biden subsequently approved an emergency declaration in Florida and ordered federal assistance to supplement state and local response efforts in the wake of the partial building collapse. The action authorizes the U.S. Department of Homeland Security and the Federal Emergency Management Agency (FEMA) “to coordinate all disaster relief efforts which have the purpose of alleviating the hardship and suffering caused by the emergency on the local population, and to provide appropriate assistance for required emergency measures, authorized under Title V of the Stafford Act, to save lives and to protect property and public health and safety, and to lessen or avert the threat of a catastrophe in Miami-Dade County,” according to a statement from the White House.

“Specifically, FEMA is authorized to identify, mobilize, and provide at its discretion, equipment and resources necessary to alleviate the impacts of the emergency,” the statement noted.