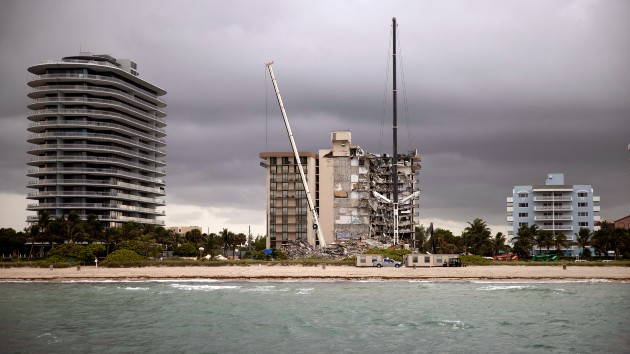 (SURFSIDE, Fla.) — As first responders continue digging through what remains of the 12-story residential building that collapsed Thursday in Surfside, Florida, town leaders are pledging to find out whether city officials or condominium board members downplayed a series of red flags about the building’s structural integrity in the years leading up to the collapse.

“We’re going to have to find that out,” Surfside Mayor Charles Burkett told ABC News on Monday, when asked whether a city official misled residents about concerns raised in a 2018 engineering report.

Five weeks after that report identified “significant structural damage” in the building, a former city building official named Ross Prieto assured residents of the building’s soundness, according to a former resident.

Prieto has not responded to inquiries from ABC News, but he told the Miami Herald over the weekend that he is not commenting on the advice of counsel.

The condominium board may also come under renewed scrutiny. Daniel Wagner, an attorney for iLawyerUp.com, represented a client who sued the Champlain Tower South condominium board in 2015 over cracks in her walls that resulted in water damage.

“My experience with this building is that it seems that a lot of the structural components in 2015 were corroded, which had been brought to the attention of the board and management, but may have fallen on deaf ears,” Wagner told ABC News.

The lawsuit sought $15,000 in damages. His client ultimately settled with the condo board on undisclosed terms, Wagner said.

The condominium association is now facing additional lawsuits following the collapse of the building, one of which is seeking $5 million in damages, citing the condominium board’s alleged “failure to properly protect the lives and property” of tenants by ignoring structural issues with the building.

“While we cannot comment on pending litigation, our focus remains on caring for our friends and neighbors during this difficult time,” a spokesperson for the condominium association wrote in a statement to ABC News. “We continue to work with city, state, and local officials in their search and recovery efforts, and to understand the causes of this tragedy. Our profound thanks go out to all of emergency rescue personnel — professionals and volunteers alike — for their tireless efforts.”

Wagner said that the “collapse of the Champlain Tower South condominiums is a wake-up call to every board of directors of every condominium in the state of Florida … associations sometimes opt to forego necessary maintenance and repairs and instead take the risk.”

Asked whether the collapse should be a “wake-up call” to condo boards, Mayor Burkett told ABC News on Monday, “The would be the understatement of the day.”

Repairs on Champlain Tower South were just starting to get underway following the results of the 2018 report, and work was being done to replace the roof when the collapse occurred.

“Once we stop rescue, then everything takes a whole different meaning to it, and then at that point, this is just going to be looked at in every single way,” Miami-Dade County Commission chairman Jose Diaz told ABC News on Sunday.