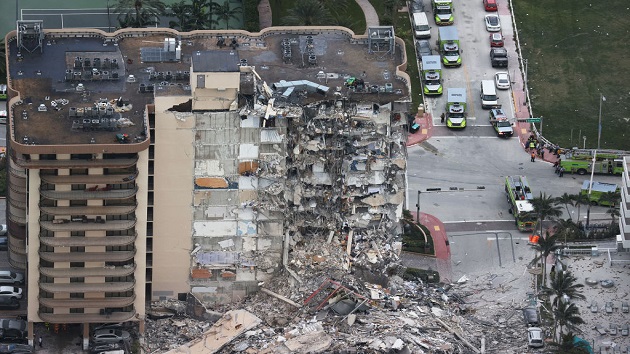 A body was recovered from the rubble of the Champlain Towers South condominium, Miami-Dade County Mayor Daniella Levine Cava said at a press briefing Saturday evening.

As search efforts continued for a third day, 156 people remain missing and 130 people have been accounted for, Levine Cava said.

The search effort was hampered by a deep fire in the rubble that was spreading and releasing gray smoke, though first responders were able to make progress throughout the day, Levine Cava said.

“Our top priority continues to be search and rescue and saving any lives that we can,” she said.

Brian Lozano told ABC News that authorities confirmed the deaths of his grandparents, Gladys and Antonio Lozano. Gladys was 79 and Antonio was 83. They had known each other for over 60 years, their son told Miami ABC affiliate WPLG.

“It’s tragic but it’s strangely unsettling that I have peace knowing they would constantly play argue about who would pass first,” Lozano said in a statement to ABC News. “But in the end … they got what they both wanted. Each other.”

Also identified on Saturday was 54-year-old Manuel LaFont, according to the Miami-Dade Police Department.

Stacie Fang, whose teenage son was rescued from the rubble early Thursday, was the first victim identified on Friday.

The cause of the building’s collapse is still unknown, the mayor said, but promised, “We are going to conduct a full and thorough investigation with all our local, state and federal resources.”

Levine Cava had previously announced an audit of all buildings that are 40 years old or more to make sure each has completed the recertification process within the next 30 days. She said she wasn’t aware of the 2018 structural report that showed evidence of cracks and flooding that came to light late Friday.

“Last night we had received photographs of this condition of the garage in the Champlain East building, and it doesn’t look right, so they are assessing whether or not the building is safe,” Paul said, noting that there were chunks of columns missing in the parking garage. “Hopefully we receive satellite information [on Sunday] that will also give us a better picture of where the vulnerabilities lie, and then we’ll know whether we need to evacuate people or not.”

Surfside town leaders held an emergency meeting Friday night where they discussed what happened in the hours before the fatal incident at Champlain Towers South and what must be done to avoid a similar tragedy in the future.

Commissioner Eliana Salzhauer said the town needs to increase the requirements of the recertification process, which includes a series of safety inspections that every building needs to complete every 40 years. James “Jim” McGuinness, the town’s building official, agreed.

“Hurricane Andrew changed the Florida building codes forever, so this terrible tragedy, which is a national tragedy, is going to change the building codes as they relate to certification,” McGuinness said.

The Champlain Towers South condominium, built in the 1980s, was up for its 40-year recertification, according to Surfside officials. Over the years, it had gone through extensive inspections due to deterioration, and the condo association was preparing to make updates and repairs.

The roof was undergoing work and the entire building had been under scrutiny due to potential construction projects nearby, officials said. Kenneth Direktor, a lawyer for the association, said the construction plans had already been submitted to the Town of Surfside but the only work that had begun was on the roof.

Direktor told ABC News there were signs of water damage to the complex, but that is common for oceanfront properties and would not have solely caused the collapse. He said he was never warned of any structural issues with the building or the land it was built on, and when a lawsuit was filed in 2015 over water damage and cracks on the outside wall of the building, engineers were hired to go through the inspection process.

At the emergency meeting Friday, McGuinness said he was on the roof of the Champlain Towers South, inspecting the roof anchors, 14 hours before it collapsed. He said there was “no inordinate amount of equipment or materials” that would cause the building to fall.

Three years before the collapse, engineers pointed out the evidence of flooding, cracking and corrosion in the building. A structural field service report from 2018 conducted by Morabito Consultants states that, among other things, the columns in the Champlain Towers South Condominium garage were cracked and needed to be replaced.

“Abundant cracking and spalling of various degrees was observed in the concrete columns, beams, and walls,” the report says. “Though some of this damage is minor, most of the concrete deterioration needs to be repaired in a timely fashion.”

The report also mentions there were cracks on the apartment balconies and that the concrete framed slab that supported the plaza/pool above the garage had undergone some previous concrete patching and epoxy injection of cracks, but the “work has performed less than satisfactorily and needs to be completed again.”

In a 2018 document, Morabito Consultants, the firm hired to conduct inspection for the condo building’s 40-year recertification, estimated the total “remediation probable construction cost” to be $9.1 million.

Other Champlain Towers will also be inspected following the collapse. “It would be imprudent not to take some types of steps to address that issue with the sister building,” Surfside Mayor Charles Burkett said during the Friday meeting.

The oceanfront complex had 136 units, and approximately 55 of them were destroyed along the northeast corridor, according to Miami-Dade Fire Rescue Assistant Chief Raide Jadallah. People in the remaining structure were evacuated.

About 130 firefighters have been taking part in the search and rescue efforts since Thursday night, looking for survivors among the debris with the help of machinery, sonar devices and trained dogs. First responders have not heard any voices coming from the pile, but they have picked up sounds, Jadallah said.

Levine Cava said there are experts, including structural engineers, on site to help keep rescuers safe while they search for survivors, as there is still “extreme risk” in working near the remaining structure. A Miami-Dade county official told ABC News there are wires dangling from the building, and on Friday, fires flared up throughout the day.

“Debris is falling on them as they do their work,” Levine Cava told reporters Friday. “But they are proceeding because they are so motivated and they are taking extraordinary risk on the scene every day.”

She described the “slow and methodical process” where rescue teams need to carefully inspect rubble before it can be touched.

“We look through debris, our engineers tell us this looks like a good path that we can take. We need to build shoring, we need to build structures that will keep you safe as you dig through this rubble. The process of removing rubble is also a very tedious process because things can be leaning against one another — we remove one piece, we could set off another collapse. So it is a very tedious process,” Castro said.

The department is also using dogs to get into tighter spaces to detect “even the slight movement” and sniff out the scent of possible victims.

“Once a dog hits on a specific area, we focus our energy in that area by using sonar detection that can detect even the slightest little scratch of someone trying to tap against a piece of metal or piece of concrete, and then we will slowly dig our way through that area to reach anyone that is potentially there,” Castro said.

The cause of the partial collapse remains unknown, though so far there is no evidence of foul play, according to Levine Cava. The Miami-Dade Police Department is leading an investigation into the incident and President Joe Biden has approved an emergency declaration in Florida, authorizing the Federal Emergency Management Agency to “identify, mobilize, and provide at its discretion, equipment and resources necessary to alleviate the impacts of the emergency,” according to a statement from the White House.