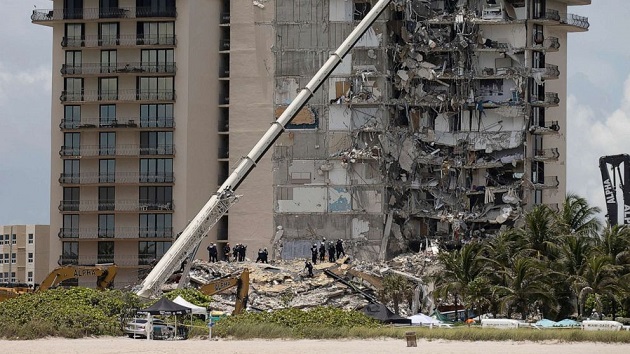 (SURFSIDE, Fla.) — The death toll has climbed to nine from the partial collapse of a 12-story condominium building in Surfside, Florida, as a massive search and rescue mission continued into its fourth day on Sunday, officials said.

Four more bodies were recovered overnight from the rubble of the Champlain Towers South condominium that buckled and gave way into a pancaking catastrophe around 1:30 a.m. on Thursday as many residents were asleep, Miami-Dade Mayor Daniella Levine Cava said at a news conference Sunday morning. More than 150 people remain unaccounted for.

Cava said additional human remains have also been recovered and DNA testing will be required to identify those remains.

Miami-Dade County Fire Chief Alan Cominsky said rescuers are still hoping to find survivors waiting to be saved in crevices and voids in the pile of concrete, twisted metal and personal belongings.

“Hope. That’s what I’m focused on,” Cominsky said. “We’re going to continue moving and searching as hard as we can and for as long as we can until we have to make that decision.”

No survivors have been discovered in the wreckage of the building since early Thursday morning when Stacie Fang, 54, and her 15-year-old son were pulled from the debris alive, Cava said. Fang later died at a hospital.

As of Sunday evening, 134 residents of the 40-year-old building have been accounted for, the mayor said. Cava urged any family that has a missing member to contact detectives and provide a DNA sample to help with identifications.

“It is very important that if you are missing a loved one, you report it,” she said.

Just after 2 p.m. on Sunday, relatives of those still unaccounted for boarded several city transit buses at a hotel where a family reunification center has been established. They were escorted by police to an area near the site of the collapsed building to privately pray and hold vigils for their missing loved ones.

The grim news on Sunday came after desperate loved ones of people missing confronted officials at a private briefing Saturday night, telling them “you are not doing enough.”

“Imagine if your children were in there,” one woman told Florida Gov. Ron DeSantis and other government officials at the meeting, according to a cellphone video obtained by ABC News.

“I know you’re doing everything you can, but it’s not enough,” the anguished woman added. “You gave us a promise and you’re not fulfilling it, and you can fulfill it. My daughter is dying.”

Mayor Cava said firefighters managed to contain an out-of-control blaze that had been burning deep in the rubble, hampering rescue efforts. She said the fire was contained around noon on Saturday.

She also said emergency teams have cut a 125-foot long, 20-foot wide and 40-foot deep trench through the rubble to help enhance the search.

DeSantis cautioned that “a lot of major debris” is soon going to be removed from the site and moved to a giant warehouse.

“The debris that gets out does have forensic value and so that’s going to be parsed once it’s taken,” DeSantis said.

Cava said six to eight rescue squads comprised of about 300 first-responders have been sifting through the debris in shifts around the clock, searching for survivors and human remains. She said hundreds of other search and rescue team members were on standby to relieve workers as they come off the pile.

Burkett said during a meeting Sunday with loved ones of those still unaccounted for, that one of the relatives asked if the Israeli team thought that the Miami-Dade rescuers “had been doing the right thing.”

“The commander from the Israeli team did not hesitate and turned around and said, ‘They’ve been doing exactly the right thing,"” Burkett said.

Burkett added that residents of the tower adjacent to the one that collapsed have been evacuated and put up in hotels. He said residents of the nearby Champlain Towers North building have also been given the choice to evacuate.

The disaster was also affecting the neighboring community of Miami Beach, which declared a state of emergency on Sunday.

“A significant portion of the staging for the emergency response efforts is taking place within Miami Beach, including use of city streets, property and other facilities for search and rescue command centers,” the city of Miami Beach wrote in a press release, adding that the declaration will ensure the city’s eligibility for federal reimbursement of emergency-related expenditures.

The city of Surfside also has also declared a similar state of emergency.

A 2018 Structural Field Survey report released by the city of Surfside found major structural damage to concrete structural slabs and failed waterproofing in parts of the tower.

One former resident claimed that Ross Prieto, a Surfside building official, said in 2018 that the building was “not in bad shape” — a sentiment that appears to conflict with an engineering report penned five weeks earlier that noted serious structural concerns.

Prieto later wrote in an email to then-Town Manager Guillermo Olmedillo that the meeting “went very well,” according to documents released by the city late Sunday.

“The response was very positive from everyone in the room,” Prieto wrote. “All main concerns over their forty year recertification process were addressed.”

“This particular building is not due to begin their forty year until 2021 but they have decided to start the process early which I wholeheartedly endorse and wish that this trend would catch on with other properties,” Prieto continued.

Prieto has not responded to ABC News’ request for comment.

Prieto’s email was among hundreds of pages of public officials’ emails on the Champlain Towers between 2018 and 2019, released by the town of Surfside Sunday afternoon.

In one complaint dated in January 2019, a member of the condo association wrote to Prieto saying they are “concerned that the construction next to Surfside is too close.” She wrote that the construction next door is “digging too close to our property and we have concerns regarding the structure of our building” and asked if a building official could come by and check.

Prieto, in response, wrote, “There’s nothing for me to check,” adding, “The best course of action is to have someone monitor the fence, pool and adjacent areas for damage or hire a consultant to monitor these areas as they are the closest to the construction.”

In response to the report, a Surfside town commissioner told ABC News that: “Certainly, [the 2018 town building inspector]’s interpretation of that report was misleading.”

“Maybe [the inspector] really believed what he said,” Commissioner Eliana Salzhauer told ABC News. “I don’t want to believe that some would go out of their way to mislead someone.”

Surfside Mayor Charles W. Burkett told reporters he did read the 2018 report but he was not yet aware of the meeting with the residents where the official said the building was “not in a bad shape.” Burkett said his office is going through every correspondence Surfside officials have made with the building and those details will be posted on the government’s website.

Jose Diaz, chairman of the Miami-Dade County Commission, promised on Sunday that officials will look at what happened in “every single way.”

“I’m very serious when I’m saying that this is something that we now have to determine,” Diaz told ABC News. “There’s a lot of older buildings (in Miami-Dade), and we’ve got to see what actually took place.”