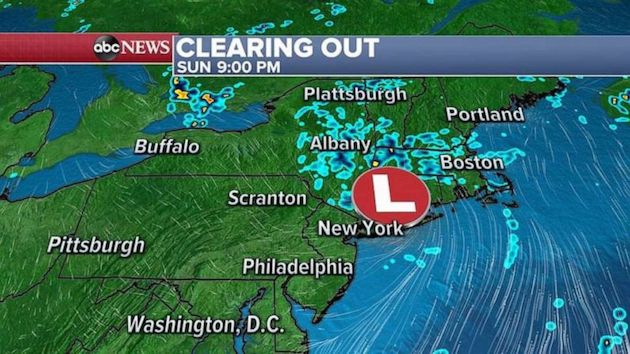 (NEW YORK) — There were over 170 reports of severe weather in the U.S. on Saturday, the majority of them on the East Coast. Out West, fire alerts range from California to Wyoming and wildfires continue to blaze.

New York City now has had 9.11 inches of rain so far for the month of July. The average rainfall for all of July is 4.60 inches. The wettest July on record in New York city is 11.89 inches of rainfall.

Boston has had 8.93 inches of rain so far in July. The wettest July on record in Boston is 11.69 inches.

Hartford, Connecticut, has had 8.40 inches for the month of July. The wettest July on record in Hartford is 11.24 inches.

There are still a handful of flash flood watches across parts of the Northeast Sunday. That is because some of the rain is still moving out and could cause some additional flooding. Some more rain showers will linger in parts of New England through the day Sunday. On Monday, there will still be an isolated chance of a shower, but overall the region will be drier and milder.

Temperatures will drop to comfortable levels in the Northeast for the next 48 hours, before the heat builds back up on Tuesday.

In the West, there are fire alerts from California to Wyoming. In California, monsoon storms could bring dry lightning which could easily start wildfires.

The Bootleg Fire in Oregon is now at 298,662 acres, still 22% contained. The Tamarack Fire in Alpine County, California, which began earlier in July, is now at 21,000 acres. This fire rapidly grew this weekend and there are new evacuation orders for parts of the region.

Excessive heat will continue today in parts of Idaho and Montana. The heat will slide eastward this weekend and give some of the upper Midwest hot temperatures including parts of North Dakota which could be over 100 degrees during the first part of this week.

Large killer whale dies after beaching itself on Florida coast