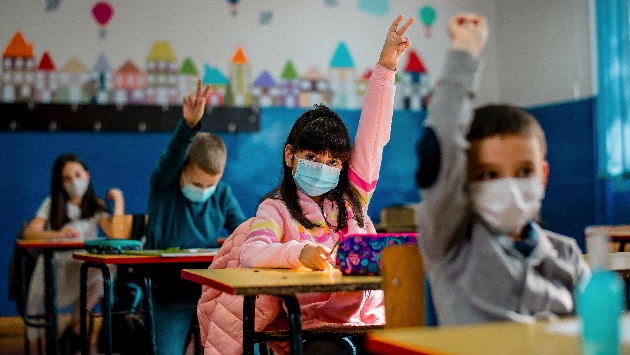 (ATLANTA) — Citing the “preponderance of the available evidence from U.S. schools,” the Centers for Disease Control and Prevention announced Friday that 3-feet of distance among students is sufficient in the classroom so long as masks and other mitigation steps are taken to prevent the spread of COVID-19.

By easing spacing requirements, the new guidance is likely to make it significantly easier for many of the nation’s estimated 57 million K-12 students to return to the classroom in-person full-time.

It also makes it easier for President Joe Biden to make good on his promise of reopening most schools five days a week.

“The goal really is to reopen schools as quickly and safely as possible,” Education Secretary Miguel Cardona said Thursday at a virtual forum sponsored by the CAA Foundation.

“Yes, I anticipate schools will be open in the fall, but I want them open in the spring. We can do it,” Cardona added.

The CDC’s earlier suggestion that schools strictly enforce 6-feet of distancing in areas with high rates of COVID-19 meant that much of the country would have to go virtual or hybrid until case levels dropped — or ignore CDC recommendations.

The new guidelines still encourage 6-feet of distancing around teachers and among children who are eating without a mask on, exercising, singing or shouting.

The decision could prompt pushback among teachers unions, which have lobbied for more safeguards before agreeing to return to the classroom and met Thursday at the White House with Vice President Kamala Harris.

Proud to be among the women leaders in the labor community meeting today with @VP to discuss the American Rescue Plan and supporting America’s workers. #1u pic.twitter.com/RiXVE3aU7U

The CDC insisted its decision was based on scientific research that is evolving, not politics. In justifying its decision, the agency pointed to new studies in Missouri, Florida and Utah that found mask-wearing students inside a classroom weren’t the source of outbreaks. The CDC though stuck with its assertion that community levels of viral transmission are still a factor in whether schools can keep COVID-19 out of the classrooms.

The move aligns the CDC with spacing recommendations by the World Health Organization and American Academy of Pediatrics.

“In summary, the preponderance of the available evidence from U.S. schools indicates that even when students were placed less than 6 feet apart in classrooms, there was limited SARS-CoV-2 transmission when other layered prevention strategies were consistently maintained,” the CDC noted in a scientific brief outlining the research internationally and within the U.S.

In a Senate hearing on Thursday, Walensky faced pressure from lawmakers. She acknowledged the CDC’s earlier suggestion of enforcing 6-feet in schools created an outsized burden for crowded school districts and that many schools ignoring the recommendation were operating without significant problems.

“Indeed, because 6 feet has been such a challenge, science has leaned in,” Walensky told a Senate committee, noting the new research underway.

Sen. Susan Collins, Republican of Maine, bluntly responded: “You need to do it now.”

Now, the guidance says 3-feet of distancing can be deployed in most cases, although there are exceptions. Teachers and other adult staff should keep 6-feet of distance between each other and with students, according to the guidance.

Students should be kept 6-feet apart any time masks can’t be worn, such as eating, and in common areas like school lobbies. The guidance also recommends 6-feet of distancing when students are exerting themselves such as singing, practicing band instruments, playing sports or exercising at school.

The guidelines also make a distinction for older kids and teens, who are more likely to spread infection than elementary-aged children.

If a community’s COVID rates is at the highest levels — known as the “red zone” — middle school and high school students should be put into small groups known as “cohorting.” Otherwise, the school should enforce the 6-feet rule.

The CDC’s updated guidance does not change its recommendations that teacher vaccinations are not necessary to reopen safely.