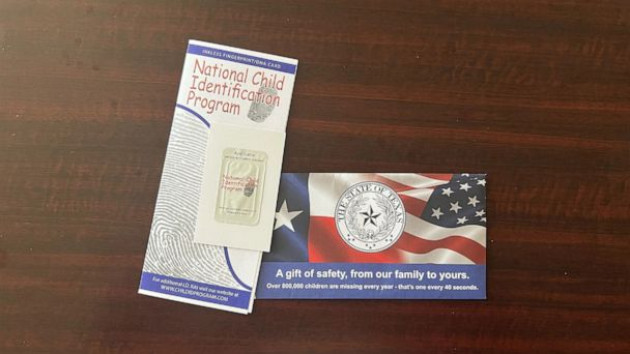 (NEW YORK) — Students in K-8 schools in Texas are being sent home with child identification kits, meant to help identify kids in the unlikely event they go missing, get abducted, or are trafficked.

The kits are being distributed by local schools as required by an amendment to Texas’ education code law that passed in the state legislature in the spring of 2021. Texas Senate Bill 2158 mandates the Texas Education Agency provide “inkless, in-home fingerprint and DNA identification kits” such as the kits from the National Child Identification Program to kindergarten, elementary and middle school students and their parents or custodians.

The TEA confirmed to ABC News’ Good Morning America that the state agency provided funding to The Safety Blitz Foundation to work with the state’s 20 educational service centers to distribute the child ID kits through school districts and that the initiative first began in the fall of 2021.

In an email to GMA, the Safety Blitz Foundation said it had partnered with the state of Texas to send out more than 3.8 million child ID kits so far this year.

According to the National Child Identification Program, such kits, which are also sold for $9.95 on its website, include an ID card for printing fingers, inkless solution, a DNA section, a section to record a child’s physical description, space for a photograph, and a section to record doctors’ phone numbers. The kits have been endorsed by the FBI for at least two decades and are a program the American Football Coaches Association founded back in 1997.

Dallas Independent School District, the second largest school district in Texas, said it received 92,400 kits from the TEA and began distributing the kits this week. The district told parents and caregivers they have the option to participate or opt out of the program.

“Once received, parents can complete the form with their child’s information and store it in a secure location at home. Each kit includes instructions in English and Spanish; participation is entirely voluntary,” the district said in a statement.

The TEA also told GMA the kits are intended to be kept by parents and caregivers and provided to law enforcement if an incident does occur and the information would help an investigation.

The timing of the kits’ distribution comes just four months after the Robb Elementary School shooting in Uvalde, Texas, which resulted in the deaths of 19 students and two teachers. After the May 24 shooting, victims’ families were asked to provide DNA samples to help identify their loved ones. Now, some question whether the new child ID kits being distributed could be used to identify children in future school shootings and say more action needs to be done when it comes to gun regulations and protecting students in schools.

“It was almost like the state just throwing their hands up and saying, ‘We can’t do anything about the guns. We’re not going to change any of the laws. So, therefore, the next best thing is to make sure that we can identify your K through eighth grader if they are killed in any type of school incident,"” Anthony Crutch, a Texas parent, told ABC News station KTRK-TV.

A financial analysis by the Texas Legislative Budget Board estimated last April the kit distribution program would cost about $8 million to implement.