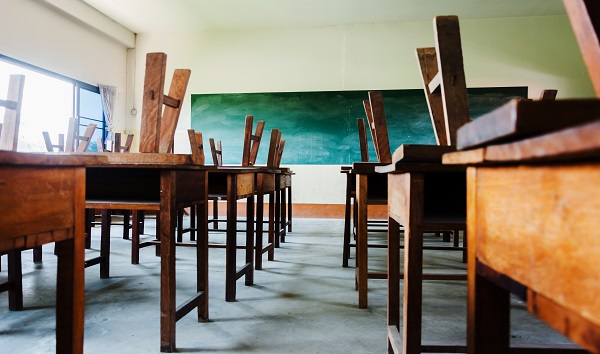 (ASHEBORO, N.C.) — A North Carolina high school graduate received his diploma on Monday four days after it was denied to him during his commencement ceremony because he wore a Mexican flag over his gown.

Ever Lopez, 18, was given his diploma after he and his parents met with Asheboro High School principal Penny Crooks, who scolded him on Thursday over walking across the graduation stage in what she described as a violation of the commencement ceremony dress code.

Lopez told ABC News that he draped the flag over his shoulders to receive his diploma because he wanted to honor his roots and his parents, both Mexican immigrants. He claimed there was nothing in the graduation dress code pertaining to flags and said he feels he did nothing wrong.

“At the end, you know, we came out with it,” Lopez said as he emerged from the high school with his diploma.

Asheboro High School officials released a statement Monday, saying, “The graduate picked up his diploma at Asheboro High School … As with all graduates, we wish him well and we will continue to serve our community in ways that help all young people meet their full potential.”

Prior to entering the school and meeting with Crooks, Lopez’s mother spoke out, saying she and her husband were going to demand an apology as well as their son’s diploma. She said they also want the graduation dress code changed to avoid similar problems for other graduates in the future.

“We are here today to try to get to the bottom of this and find a solution to be able to make change,” Lopez’s mother, Margarita Lopez, said at a news conference in which she introduced herself and her husband as “proudly the parents of Ever.”

Speaking with the aid of a Spanish interpreter, Margarita Lopez explained the milestone moment for her and her husband, watching her son become the first U.S. high school graduate of their family, was sullied by the denial of his diploma.

“We came here on Thursday with so much pride and ready to get the diploma of my son. We were so proud the instant we heard his name being called until we saw him approach the principal where he was stopped and we instantly got choked up,” the mother said as her son stood behind her.

She said that following the graduation ceremony she and her husband were asked to meet with Crooks in her office before they were escorted off the campus by four police officers.

“What happened on Thursday isn’t just about my son, it’s about our entire Latino community,” Margarita Lopez said.

“Ever has worked so hard for four years to get this diploma. Until this day, he was a graduate without a diploma.

She added, “As parents, we’re so proud that he has taken on the honor and pride of where his roots are and where he comes from.”

Ever Lopez said that Crooks was open to the idea of changing the graduation dress code. It was not immediately clear if Crooks offered an apology.

“She said she was going to reevaluate it. Hopefully, it does change,” he said.

The new graduate said seeing his parents’ faces light up as he received his diploma and knowing they came from Mexico to provide a better life for him, “means the world to me.”

“They’re the ones that really wanted it for me. I did it for them,” Ever Lopez said. “And I feel really grateful now that I have it.”

His mother added: “I felt my heart jumped out of my chest.”

“I felt so much joy, thinking that my son works so hard for this and was able to accomplish it,” she said.

Livestreamed video footage from the graduation ceremony shows the principal asking Lopez to take the flag off. After an unsuccessful attempt to take it off, he was handed his diploma holder, which the other students also received. But after walking across the stage, he was denied his actual diploma.

Asheboro City schools said in a statement that the graduation dress code was shared with students ahead of time and allowed for students to decorate their graduation caps, but “the wearing of a flag of any kind is a violation of the dress code.” In the livestream footage of the graduation, a number of students are seen with alterations to their caps, featuring handwritten messages, drawings or flowers.

The incident has sparked outrage and led to a protest outside the school Friday.

The Asheboro Police Department is investigating 10 emails sent to school employees threatening violence against the school. The school district superintendent said an employee received a threatening email on Friday that read, “I’m gonna shoot up this school if you don’t give that young man his diploma,” according to the Asheboro Police Department.

Lopez and his family said they condemn any violence or threats directed at the school and its employees.

“That’s just straight stupid, like, it shouldn’t have been done because we don’t do that,” Ever Lopez said. “And all we do here is love and support, you know, and to all those who did that, it’s just shame. Shame is bad, you know, they shouldn’t have done it.”

However, he said he was appreciative of the people in his community and across the country who supported him in non-violent ways.

“I didn’t expect none of this, you know, it just happened,” he said. “But at the same time, I’m grateful knowing that I have a big community behind me and that we’re all in this together, you know, and will never walk alone.”

Meanwhile, another graduating high school student in San Antonio, Texas, endured a similar ordeal over displaying a Mexican flag at her graduation on Saturday.

Ashley Saucedo, a graduate of Southwest Legacy High School, told ABC affiliate station KSAT-TV in San Antonio that her pomp and circumstance were cut short when she displayed the flag on the graduation stage and that she was escorted out of the Alamodome during the ceremony.

“I also did it for every parent out there who’s an immigrant and comes here to the United States to have a better life, not only for themselves but for their kids and the future grandkids and everybody else, so they can live the dream, the American dream,” Saucedo said.

“The campus and district take great pride in organizing a memorable commencement ceremony for all 450 seniors and their families,” the statement reads. “It is for this reason that protocols are applied to ensure events, such as graduation, remain dignified without large disruptions such as props, flags, somersaults, cartwheels, or other actions. All seniors who attend their commencement ceremony are made aware that breaking these protocols could lead to consequences affecting their participation for the remainder of the ceremony.”