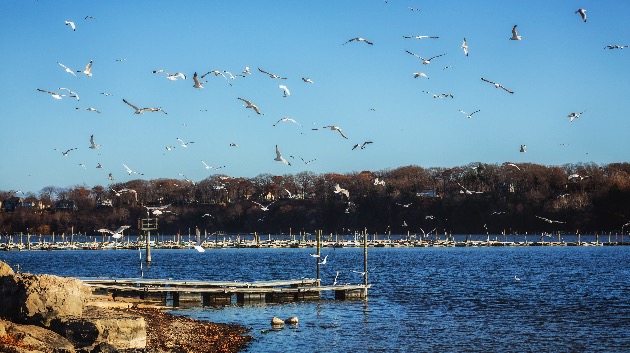 (NEW YORK) — A 137-mile police chase involving a stolen ambulance across New York state ended Sunday with the vehicle in a bay and the alleged thief in handcuffs, authorities said.

Kunkel Ambulance, an ambulance service based in Utica, east of Syracuse, said one of its ambulances was stolen from the company’s location during a post-shift cleaning on Sunday morning at approximately 10:30 a.m. ET. No employees were in the vehicle when it was taken, according to the company.

Kunkel Ambulance said it immediately notified authorities of the theft and coordinated with law enforcement to track the stolen ambulance using GPS.

The New York State Police said it assisted the Utica Police Department with the hot pursuit. State troopers attempted to stop the stolen vehicle on the New York State Thruway at approximately 10:42 a.m. ET, but the driver refused to comply.

Troopers later spotted the ambulance heading westbound on Interstate 490 but failed to stop it as the runaway driver took the Culver Road exit in Rochester, according to state police.

The vehicle ultimately turned onto Seneca Road and sped down the narrow, winding, dead-end street before driving into Irondequoit Bay near a yacht club.

The driver swam to a private boat on the water and was later taken into custody by authorities. The individual received medical attention at the scene. Charges are pending, state police said.

A dive team from the Monroe County Sheriff’s Office was called in to help retrieve the submerged ambulance, according to state police. Crews spent more than an hour pulling the vehicle out of the water.

Authorities have not yet released the suspect’s identity nor provided any details on a possible motive. ABC News has reached out to the Utica Police Department for further details.

Kunkel Ambulance said it is cooperating with investigators.