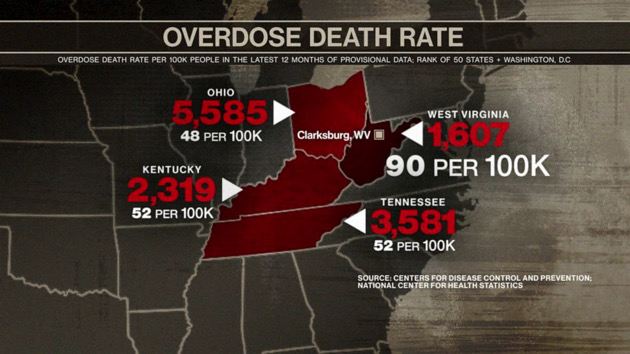 (NEW YORK) — West Virginia had the highest opioid overdose death rate per capita in the country last year, according to the U.S. Centers for Disease Control and Prevention.

OxyContin, a prescription drug that helped fuel the crisis, was heavily marketed in towns across the state and its use spread among residents of all ages, experts said.

“Nobody was prepared. Nobody knew that they were going to get a drug that was supposed to help alleviate pain,” Maegan Malcomb, a woman recovering from addiction in West Virginia, told ABC News.

While first responders and doctors in the state scramble to save people from these decades of danger, they also are fighting a new phase of the crisis as fentanyl overdoses have jumped in the area.

Doctors and medical experts said there is a straight timeline from the rise in opioid prescriptions to fentanyl overdoses in places like West Virginia.

When OxyContin was first introduced into the market, Purdue Pharmaceuticals misled medical professionals contending the company’s pain killer drug was far less addictive than other opioids. In 2007, the company paid $600 million in criminal penalties after admitting to misbranding OxyContin.

Two years ago, Purdue admitted that it marketed dangerous opioids to health care providers despite having reason to believe those providers were diverting drugs and that often led to abuse, according to the Department of Justice.

Lou Ortenzio, a former West Virginia doctor, told ABC News he has been feeling guilt for the years that he prescribed OxyContin.

“I never envisioned prescribing somebody with pain would have this catastrophic tidal wave effect,” he said.

Ortenzio himself became addicted to prescription pain pills, taking as many as 30 pills a day before he got help. Today, he helps run a recovery clinic in West Virginia for other people living with addiction or in recovery.

Even though OxyContin and other related pills are harder to prescribe, there is a population of West Virginians who are still suffering from addiction and have found an alternative to those prescription pain pills – primarily heroin, health experts said.

But by substituting a new drug, those suffering from addiction are putting themselves at a bigger risk, the experts warned.

Fentanyl has been found in as much as 70% of the nation’s heroin supply, according to the CDC. In many cases, those who use heroin have no idea that fentanyl has been added until it’s too late.

First responders in the town of Clarksburg, West Virginia, told ABC News that they respond to calls related to fentanyl-related overdoses daily. In one day they responded to three overdose calls.

Last year, fentanyl was the leading cause of death for Americans between the ages of 25 and 44, according to the CDC. And some fear it’s only going to get worse.

Dr. Stephen Loyd, also developed an opioid addiction, but is currently in recovery. He runs a recovery center in Nashville, and told ABC News that his facility loses several patients a week due to fentanyl.

“There are not weeks that go by that we don’t,” he told ABC News.

Loyd said there is a direct link between the rise of OxyContin prescriptions in the 1990s and 2000s and the current fentanyl crisis in the country.

“These folks that are coming in with fentanyl, 98% of them got started with pain pills,” he said.

Loyd and other experts said that the country will have to work harder to help those living with addiction , particularly in places like West Virginia that were the hardest hit during the crisis.

Malcomb told ABC News that the only way to deal with a drug problem is to deal with people directly and persevere.

“I have no choice if I don’t want to die,” she responded when asked if she’d continue her recovery. “[I’m] surprised I’m not dead now.”