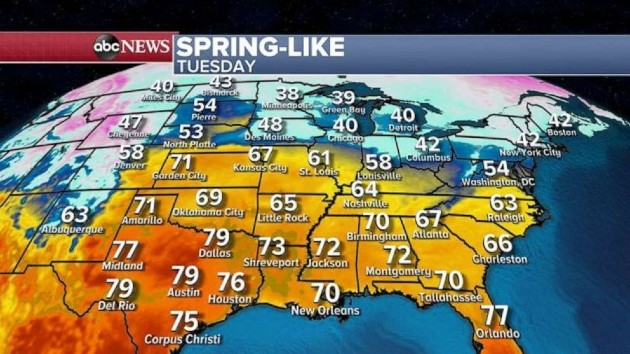 (NEW YORK) — Spring-like weather is on the way for millions of people from Denver to New York City on Tuesday.

The latest hit of snow that moved through the Northeast Monday is long gone, but not before leaving up to 10 inches of snow in upstate New York.

There was a general swath of heavy wet snow measuring 3 to 6 inches from West Virginia to Vermont and this snow made roads slick causing several spinouts and accidents in the Northeast.

Now, the warm up is on the way with temperatures this mild not seen in months.

On Monday, the Twin Cities in Minnesota reached 41 degrees, the warmest temperature there since before Christmas.

Some areas on Tuesday will warm even more and it will feel like the middle of Spring, not February.

Dallas, Texas, was hit so hard with cold and snow last week but it should be near 80 degrees Tuesday.

Even 50-degree temperatures are expected in the Dakotas and near 50 in Des Moines, Iowa.

Some of that spring-like warmth will move into the Northeast with temperatures reaching the 60s in Washington, D.C. and near 50 for New York City and Boston by Wednesday.

Meanwhile, a couple of storms are moving into the Pacific Northwest with heavy snow, flooding rain and damaging winds.

On Monday, due to several snow slides and avalanche danger, several main mountain passes have been shut down in Washington.

Some of these storm systems will move into the Upper Midwest and the Great Lakes Tuesday with snow expected.

On Tuesday, 12 states are on alert from Washington to Michigan for snow, avalanche danger, high winds, flooding and there is even a blizzard warning in Montana.

Snowfall totals will be measured in feet for the Cascades and northern Rockies where locally 3 feet could be possible through Wednesday.

Lighter snowfall totals are expected in the northern Plains and the Great Lakes as well where locally 2 to 6 inches could be possible from the Dakotas to Michigan.