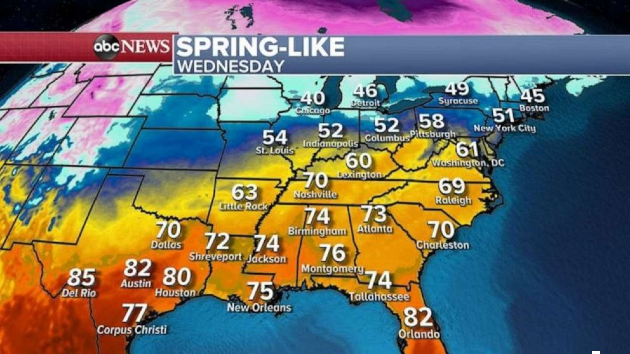 (NEW YORK) — It is starting to feel like spring from California to New York and around the rest of the country.

Record high temperatures were broken on Tuesday in the San Francisco Bay area with Oakland reaching 84 degrees and Napa hitting 81.

In Dallas, Texas, temperatures reached 81 degrees after being below zero last week and it was the warmest temperature in Dallas since last November.

Kansas City reached 69 degrees which made it the warmest temperatures there since November.

Elsewhere, Washington, D.C. reached 60 degrees Tuesday which was the warmest temperature there since before Christmas.

Some of this warmth will move into the Northeast Wednesday with New York City reaching the 50s and it could be the warmest temperatures there since Christmas as well.

There will be mild weather for the Eastern U.S. Wednesday with 70-degree weather in Nashville, Tennessee and temperatures in the 50s in Indianapolis and Columbus, Ohio.

This mild weather will be on and off through the weekend for the Eastern U.S. with temperatures nearing 50 degrees by Saturday, even in recently frozen Chicago.

Meanwhile, in the Rockies and the Pacific Northwest, a wintry scene is unfolding with many areas getting feet of snow in the last few days.

An avalanche warning continues for Idaho and Montana for the combination of heavy snow and windy conditions which is making the snowpack unstable.

Snow will move into Colorado Wednesday with Denver seeing a few inches while up to 8 inches of snow is possible just south and west of the city — and this is after Denver reached the 60s Wednesday.

Additional snow is also forecast in the Northwest where locally 1 to 2 feet of snow is expected in the Cascades of Washington and Oregon.