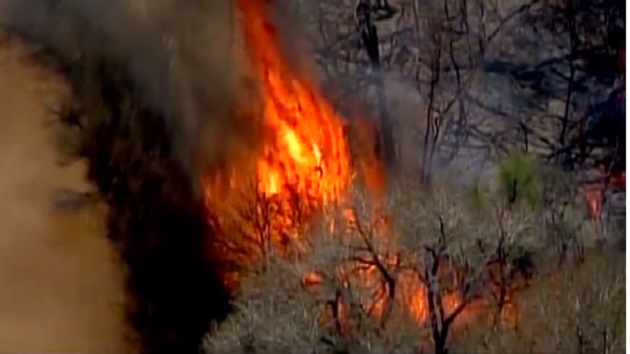 New Mexico Gov. Michelle Lujan Grisham declared a state of emergency Saturday due to the multiple wildfires raging through the state. The Calf Canyon Fire and the Hermits Peak Fire merged, burning through more than 42,000 acres east of Santa Fe by Saturday morning, officials said.

The Cooks Peak Fire in northern New Mexico is the largest at nearly 50,000 acres and 0% containment.

Earlier this month, the McBride Fire killed a couple who did not evacuate their home in Ruidoso, New Mexico, in time. The Bosque Fire prompted voluntary evacuations in Jarales, New Mexico, after it sparked earlier this week.

The fire danger also extended to the Midwest, where at least one person was killed in Red Willow County, Nebraska, the state’s emergency management agency announced in a press release. Three firefighters have been injured since Friday as fire crews attempt to mitigate wildfires burning in 12 counties, according to officials.

Arizona Gov. Doug Ducey declared a state of emergency earlier in the week due to the “fast-growing” Tunnel Fire. The wildfire had burned through more than 21,000 acres north of Flagstaff after it sparked on April 17. On Saturday, the fire was only 3% contained, Coconino County officials said. The fire prompted mandatory evacuations in the area after threatening hundreds of homes and about 1,000 animals.

The Crooks Fire, which has burned through more than 3,000 acres south of Prescott, Arizona, is 15% contained, according to fire officials.

Dangerous fire conditions persisted throughout the region over several days, with relative humidity and high winds assisting in the rapid spread of the infernos. Widespread drought has also caused dry fuel on the ground to allow the fires to explode.

On Sunday, much lighter winds were expected to ease the fire danger, severely decreasing the conditions for them to spread through Monday.

ABC News’ Daniel Amarante, Meredith Deliso and Will McDuffie contributed to this report.