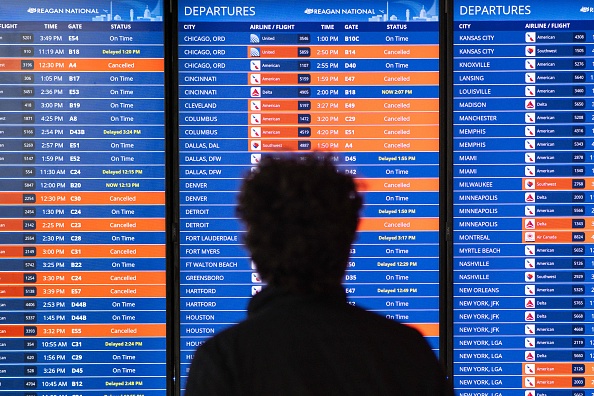 (NEW YORK) — In a nearly three-minute video statement Tuesday, Southwest CEO Bob Jordan said he is “truly sorry” for the airline’s failures over the holiday weekend, praising the airline’s employees, who he said “are showing up in every way,” as the airline grapples to catch up after canceling thousands of flights.

“I’m apologizing to them daily,” he said.

Airlines canceled thousands of flights in what became a Christmas nightmare for many passengers as winter storms and staffing issues wreaked havoc across the U.S.

Jordan attributed some of the issues to how Southwest constructs its flight paths.

“We build our flight schedule around communities, not hubs, so we are the largest airline in 23 of the top 25 travel markets in the U.S., cities where large numbers of scheduled flights simultaneously froze as record bitter cold brought challenges for all airlines,” he said.

Southwest is “significantly reduc[ing]” its number of flights over the next few days,” Jordan added, in the hope that things will “be back on track before next week.”

“We’re focused on safely getting all of the pieces back into position to end this rolling struggle,” he said.

Southwest is now doing a “reset” by moving some crews and planes around the country without passengers to get them into place and restart operations. Southwest have stopped selling tickets on flights coming up in the next few days. Passengers are being encouraged to buy flights on other airlines to get to their destinations before the new year.

President Joe Biden tweeted that his administration is “working to ensure airlines are held accountable” amid the changes. Biden urged those who have been affected by cancellations to visit the Department of Transportation website to see if they’re entitled to compensation.

On Christmas Day, 42% of Southwest’s flights were canceled and 48% were delayed, according to data from FlightAware. As of Monday night, data showed that nearly 4,000 flights had been canceled within, into or out of the U.S., while more than 7,700 had been delayed.

Jay McVay with Southwest Airlines said Monday night that “the sheer size of the storm” nationwide affected all major airports.

“It’s just the fact that this one started West swept east and impacted almost every single one of our largest airports that put us in a position where we struggled to recover, and we struggled to get our flight crews and airplanes where they needed to be,” McVay said from Houston’s William P. Hobby Airport.

Capt. Casey Murray, president of the Southwest Airlines Pilots Association, said in a statement earlier Monday that the ordeal has “been catastrophic.”

“It’s been a failure at every level at Southwest. Our pilots, our front-line employees have worked under enormous stress to try to get our passengers from A to B, but we were dealt a really bad hand as far as Southwest is concerned,” Murray said, in part, adding that their “processes,” information technology or infrastructure “just wasn’t there to support the operation.”

“And, unfortunately, our customers are bearing the brunt of it,” Murray added.

“Cancellation rates across the system for all of the other airlines together are averaging about 5%. With Southwest, it’s more in the neighborhood of 60 or 70%,” Buttigieg said. “It’s a shocking and unacceptable level of disruption combined with passengers being unable to get anybody on the phone to help them, and the airline indicating that they’re actually not able to fully keep track of where their own flight crews are.”

Buttigieg said passengers are entitled to refunds when their flights are canceled and that additional accommodations — like covering the cost of food, ground transportation and hotels — should be provided in this specific scenario.

“As I made clear to the CEO, you shouldn’t have to request it. This should be something that they’re proactively offering,” he added.

Angry Southwest customers took to Twitter on Monday, sharing their frustrations over the delays, cancellations and long hold times to speak to customer service agents.

“With consecutive days of extreme winter weather across our network behind us, continuing challenges are impacting our customers and employees in a significant way that is unacceptable,” Southwest said in a statement posted online. “And our heartfelt apologies for this are just beginning.”

Southwest said it is working to “address the wide-scale disruption” by repositioning its crew and planes, which were all in the wrong spots.

ABC News spoke with three stranded travelers — one staying overnight at an airport in Boston until her new flight, one stranded in Chicago after his flight got canceled and one driving with a stranger to make it to his Disney Cruise in Tampa after flight issues.

Each traveler blamed delays on staffing rather than the weather.

ABC News reached out to American Airlines, JetBlue, Delta and United to learn about how staffing is impacting their current delays and cancellations.

“American’s operation, like the entire industry, was heavily impacted by Winter Storm Elliott. After a challenging day on Friday, Dec. 23, the American operation was largely recovered by Saturday evening and we have been operating normally since Christmas Day,” American Airlines said in a statement. “Our quick recovery was only made possible by the American team working diligently at our airports, on our aircraft and in our operations and reservation centers.”

“I wanted to fly home for Christmas,” Laetitia Duler, who was flying home to San Francisco from Boston for the holiday, told ABC News. “As soon as I entered the line, they were just like, ‘your flights canceled. Like, bye."”

Eric Jernigan was trying to fly from Jackson, Mississippi, to Tampa, Florida, for a Disney cruise when his Delta flight was canceled because of a lack of crew, he told ABC News.

He and five others decided to drive to Florida after getting stuck at Jackson-Medgar Wiley Evers International Airport.

The city of Buffalo, New York, initiated a travel ban as blizzard conditions moved into the area.

According to New York Gov. Kathy Hochul and local officials, 29 people have died in the state following the aftermath of an enormous lake-effect snowstorm.

Buffalo Niagara International Airport announced Monday that it will be closed until Wednesday as its crews work “around the clock” to get the airport back up and running.