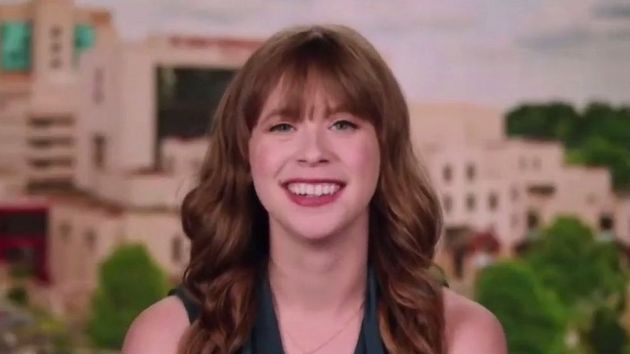 (NEW YORK) — Hayley Arceneaux’s dreams of becoming an astronaut were crushed after being diagnosed with pediatric bone cancer at 10 years old, but now she’s set to go to space in the world’s first all-civilian mission to orbit Earth.

Now, the 29-year-old St. Jude Children’s Research Hospital physician assistant is set to make history as the youngest American, first pediatric cancer survivor, and person with a prosthesis to go to space as one of the crew members in SpaceX’s Inspiration4 mission.

The four-person mission will launch in September in a SpaceX rocket commanded by entrepreneur and part-time pilot Jared Isaacman.

Isaacman donated two seats to the hospital: One for Arceneaux and another that is being raffled to the public as part of a $200 million fundraiser for the hospital.

Arceneaux shared how her battle with cancer as a child prepared her for the mission into orbit and her excitement for the experience ahead.

Arceneaux told co-host Sunny Hostin that she’s “been so excited” and “so ready” for the space mission.

During her one-year treatment at St. Jude for bone cancer, Arceneaux had to get surgery to replace her knee and had a metal rod put in her left thigh bone to save her leg.

“I’m really excited to show all these kids going through cancer treatment what they can do too,” Arceneaux said.

Arceneaux’s family trip to NASA’s headquarters when she was 10 years old inspired her to become an astronaut, but she said her hopes came to a halt after being diagnosed with bone cancer just a few months later.

Looking back on when the doctors told her she had cancer, Arceneaux recalled bursting into tears. “I kept saying, ‘I don’t want to die. I don’t want to die,’ because at age 10, everyone I had known with cancer had passed away.”

She added that it wasn’t until she was “walking into the doors of St. Jude’s” that she felt hope for survival.

“That year that I spent going through cancer treatment at St. Jude was actually the most important year of my life,” Arceneaux said. “It definitely made me who I am, and made me tough because of it, and I think in a way it prepared me to go to space.”

While Arceneaux beat cancer, she thought that going to space was a wish she’d never be able to fulfill. That is, until she received an “out of the blue” phone call in January from St. Jude.

“I was absolutely shocked when they asked if I wanted to go with them to space,” she said. “Immediately, I said yes, and then thought for a second. I was like, ‘Well let me check with my mom."”

“Getting to be this first all-civilian mission to space, and what this means for everyone coming after us, it’s incredibly exciting to be part of,” she said.

Arceneaux, who’s currently an astronaut-in-training and will become a certified commercial astronaut after completing her mission, will be orbiting Earth for three to four days.

During her training, she said she’s learned the ins and outs of SpaceX’s spacecraft as well as centrifuge training and hypoxia training. Next week, the crew will learn about water survival.

Since Arceneaux is a physician assistant, she’s the designated medical officer on the mission and goes through additional training.

While they are in orbit, “going deeper, higher into space” than any space crew has in 15 years, Arceneaux and the crew will do research on the radiation profile that is seen in that level of space.

“We’re gonna be doing some cognition tests while we’re up there, taking some blood and all kinds of samples to learn any radiation exposure effects, and also testing the microbiome as we’re in this close capsule, all of us breathing the same air, seeing really what the bacteria does on our skin,” she said on “The View.”

On July 11, billionaire Sir Richard Branson flew to the lower edge of space and back to planet Earth in the first fully crewed flight from his private space tourism firm Virgin Galactic. Another billionaire, Amazon founder Jeff Bezos, is set to launch to the edge of space on Tuesday with the first crewed flight from his private space-faring firm Blue Origin.

Arceneaux weighed in on the billionaires blasting off into space.

“It’s so exciting that more and more people are getting to experience space,” Arceneaux said, adding that her Inspiration4 mission crew was together to watch Branson and plan to be together again to watch Bezos.

“How our mission is different is we’re going to be orbiting, and spending three days in space, participating in research and going through some really extensive training to get us there,” she continued.

“Until my mission, I could have never been a NASA astronaut with the rod that I have in my leg,” Arceneaux said. “Now that space travel is being opened up, you no longer have to be physically perfect to go to space.”

Every episode of ABC’s award-winning talk show “The View” is now available as a podcast! Listen and subscribe for free on Apple Podcasts, Google Podcasts, TuneIn, Spotify, Stitcher or the ABC News app.