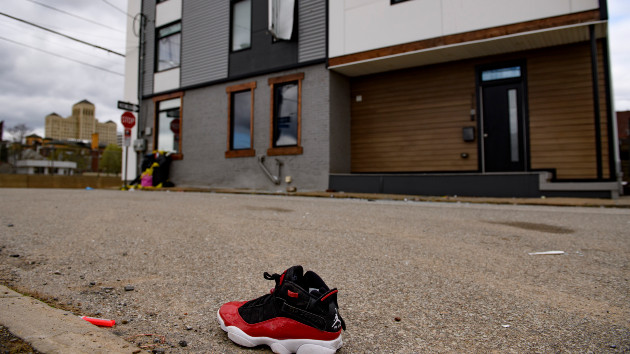 (PITTSBURGH) — As the investigation to identify suspects entered its fourth day in a mass shooting at a Pittsburgh Airbnb house that left two teenagers dead, police amended the number of gunshot survivors from eight to nine.

The Pittsburgh Police Department said in a statement that the new non-fatal gunshot victim was taken to a hospital in a private car and arrived at an emergency room on the morning of the shooting in stable condition.

No arrests have been announced in the shooting that occurred early Sunday morning during a party at an Airbnb rental in the East Allegheny neighborhood of North Pittsburgh that police said was attended by more than 200 people.

Schubert said Tuesday that about two hours before the shooting erupted, a police officer responded to a noise complaint at the Airbnb house, but left after issuing a verbal warning to keep the noise down.

“There was nothing unusual to indicate that something was wrong,” Schubert said. “We have some information that shows that a lot of these people didn’t come until after midnight.”

The shooting erupted around 12:40 a.m. Sunday, and investigators collected 90 shell casings from the scene, including 50 from inside the Airbnb home.

Schubert said the shooting broke out after an “altercation” inside the house, but has declined to elaborate.

The Allegheny County Medical Examiner’s Office identified the two 17-year-olds killed in the shooting as Mathew Steffy-Ross and Jaiden Brown. Both teens were scheduled to graduate from high school in June, according to friends and loved ones.

“Matthew was a fun, loving kid that cared so much about everybody. Matthew would give you the shirt off your back,” Steffy-Ross’ great-aunt, Bonnie McLain, told ABC affiliate station WTAE-TV in Pittsburgh.

She described Steffy-Ross, a senior at Grace Non-Traditional Christian Academy in Pittsburgh, as having “the biggest smile in the world.”

“He cared about people and he loved people, and he acted upon it,” McLain said, adding that she last spoke to her nephew on Saturday morning and heard of his death from a neighbor on Sunday.

Pittsburgh community activist Lee Davis of the Greater Valley Coalition Against Violence told WTAE that he was a mentor to both Steffy-Ross and Brown.

“I have been to over 100 funerals in the 17 years I have been doing this work, and I thought I was all cried out, but when I seen what happened to Jaiden and Matt, the tears just came all over again,” Davis said. “It just hurt my heart.”

Davis said he knew Brown, a senior at Woodland Hills High School in Pittsburgh, since he was a child.

“His energy was great,” Davis said of Brown. “Everybody loved him, and he became very well-liked in the community. To see this happen to him was really heartbreaking … because he had a very bright future.”

Cathy Jo Welsh, a member of the youth anti-violence program Helping Out Our People in Pittsburgh, said Brown’s father died from an illness a few years ago and that Steffy-Brown’s mother died recently.

“(Steffy-Brown) was just getting his bearings from losing his own mother and just learning how to live with trauma and grief,” Welsh told WTAE.