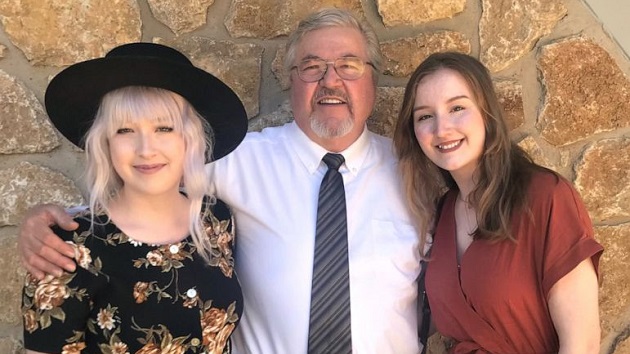 (SILOAM SPRINGS, Ark.) — Sisters paid tribute to their late father, who died after battling COVID-19, by getting tattoos of the final note he wrote to them.

Anna Harp, 27, and Abrielle Clausing, 21, are two of six siblings and Harp describes her father, Rudolph Clausing, as “the hardest worker” and “the most selfless person I’ve ever met.”

“He was a friend to everyone. He always saw the best in everyone,” Harp said. “We would be at the grocery store sitting out in the car …and he would always walk outside talking to someone like he’s known them forever. I’ve always admired that about him, that he so effortlessly could make someone smile.”

Rudolph Clausing had a hereditary lung disease and contracted COVID-19 weeks before Thanksgiving.

“My sister and I, for the whole year leading up to when he got COVID, we were just obsessive about his health,” Harp said. “It was our worst nightmare come true.”

Their father was in and out of the hospital for two months as he battled the virus. One night in January, his family noticed he wasn’t doing well and called an ambulance to rush him to the hospital.

“Once he was back in, it was just like, endless, like no good news, basically, like he wasn’t recovering,” Harp said. “It just seemed like, his lungs were just tired and they couldn’t work anymore.”

Harp, Clausing and their mother were able to go to the hospital to say goodbye to Rudolph Clausing. At the hospital they found a note he had written from his hospital bed that read: “It has been such a good life.”

“He’s such a selfless person to be thinking about other people on the last moments of his life. He thought to write this note to us, so that we knew that he had a good life, and he was at peace with the life that he had,” Harp said. “That just shows like the type of person he was.”

After his death, Harp and Clausing wanted to pay tribute to their father with tattoos of his words. The sisters drove to Tulsa, Oklahoma, a few hours away from their home in Siloam Springs, Arkansas, to get special tattoos done by Dustin Cleveland, Harp’s favorite tattoo artist.

“It was just really important to us because we just have so much love for him,” Harp said. “This was the only way we could think to show it and just have this reminder everyday that he did live such a good life.”

Harp posted the video of them getting the tattoos on her TikTok account and said she was blown away by the responses. Over one million people watched the video and thousands of others left touching comments.

“It’s crazy because after something like this happens you just feel so isolated because you’re only seeing people online that are like living their normal lives now, but I’m never going to be able to go back to a normal life,” Harp said. “Seeing all those comments you realize you’re not alone in this.”