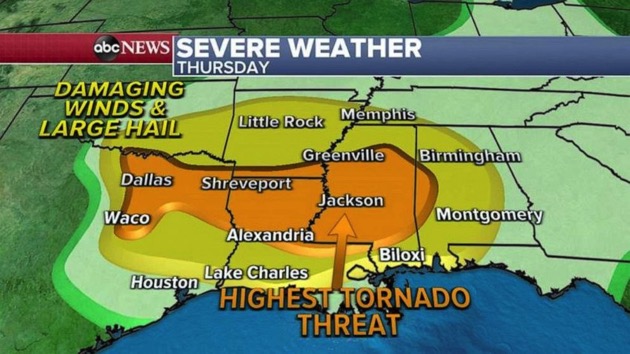 (NEW YORK) — As a storm system moves through the South Thursday morning, several tornado warnings have been issued in Mississippi and Louisiana. A couple of these warnings are around New Orleans, where up to 4 inches of rain has caused flooding.

This storm system will then move east and north Thursday afternoon and the threat for severe thunderstorms will stretch from Florida all the way to Michigan. The biggest threat with these storms will be damaging winds and an isolated tornado.

Just as this latest storm system moves out, yet another storm will move into the southern U.S. for Friday, with more severe weather expected.

Damaging winds, a few tornadoes and large hail threats will extend from Dallas all the way to Birmingham, Alabama.

The highest tornado threat will be in Louisiana and Mississippi, including Jackson.

Some of these severe thunderstorms will bring very heavy rain, especially along the Gulf Coast, where flash flooding is possible over the next 48 hours. Locally more than 4 inches of rain is forecast in Alabama, Georgia and Florida’s panhandle.

There were more than four dozen damaging storm reports Wednesday from Texas to Wisconsin, including three reported tornadoes in northern Louisiana. There was also damage Thursday morning in Louisiana, from these possible tornadoes.

Straight-line winds gusted to over 60 mph in Illinois and Missouri, which uprooted large trees.