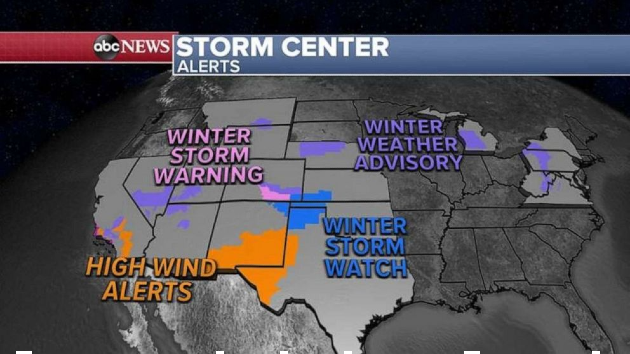 (NEW YORK) — Tornado and severe weather season has arrived and a new storm system is moving across the country from the West Coast to the East Coast with a major severe weather outbreak expected across the South.

Over the next three days more than 50 million people will see a threat for damaging winds, hail and tornadoes.

There were already a couple of tornadoes around Kansas City, Missouri producing damage to homes on Monday and, further north, that same storm brought more than a foot of snow from the Dakotas to Minnesota with multiple accidents and spinouts around the Twin Cities.

Now this storm system is moving into the Appalachians and a new storm is coming out of the West.

As these two storms march through the country, 18 states are on alert for strong winds and heavy snow from California to New York.

Over the next 24 hours, severe weather is expected from the Plains — including Kansas, Oklahoma and Texas — which is where there is the biggest threat for damaging winds, large hail and a few tornadoes.

Ahead of this storm on Tuesday, a stationary front will produce strong storms from Louisiana to Alabama and these storms could also produce isolated tornado and damaging winds.

As this storm moves east, the biggest threat for tornadoes and damaging winds is expected on Wednesday from Arkansas to Alabama, including major cities like Memphis, Tennessee and Birmingham and Montgomery, Alabama.

The worst of the severe weather will begin early in the afternoon on Wednesday or evening and overnight into Thursday morning.

By Thursday, the severe weather threat moves into the Southeast from Virginia to Florida with tornadoes, damaging winds and large hail all possible across the region.