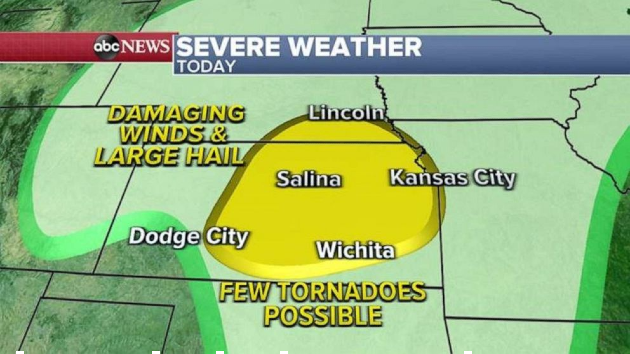 Later on Tuesday and into Tuesday night, severe weather will move into the central Plains including Kansas, Missouri and Nebraska and damaging winds and large hail will be the primary threat but the possibility of an isolated tornado cannot be ruled out.

On Wednesday afternoon and evening, a severe weather threat will move into the South including Arkansas, Louisiana, Mississippi, Tennessee and Texas with the biggest threat from these storms being damaging winds, a few tornadoes and large hail.

But ahead of the stormy weather is summer-like warm, dry and windy conditions from California to the Great Lakes.

Windy and dry conditions helped to spread a wildfire in Southern California in the Angeles National forest north of Los Angeles but the forward progress of the fire was stopped and no structures were burned and no people were injured.

In addition to the dry and windy conditions, dozens of record highs were tied and broken Monday from the southern Rockies to the Great Lakes.

These records include Sioux Falls, South Dakota hitting 90 degrees, which was the earliest 90-degree day ever recorded in the city. Minneapolis reached a record of 85 degrees, the warmest temperature this early in the season since 1991, and even El Paso, Texas reached a record high of 92 degrees on Monday.

Windy, dry and very warm conditions will continue Tuesday from Arizona to western Texas where critical fire danger was issued by the National Oceanic and Atmospheric Administration (NOAA).

The relative humidity is down to 5% and wind gusts to near 50 mph are expected in the area.